Why oil is still our favourite commodity

The performance of energy has significantly diverged from that of all other commodity sectors over the last twelve months.

Whilst energy delivered positive gains, the return of the other sectors was negative (figure 1).

We re-evaluate whether oil is still our preferred commodity or if the prices of other commodities have fallen to such a degree, that they have become more attractive. 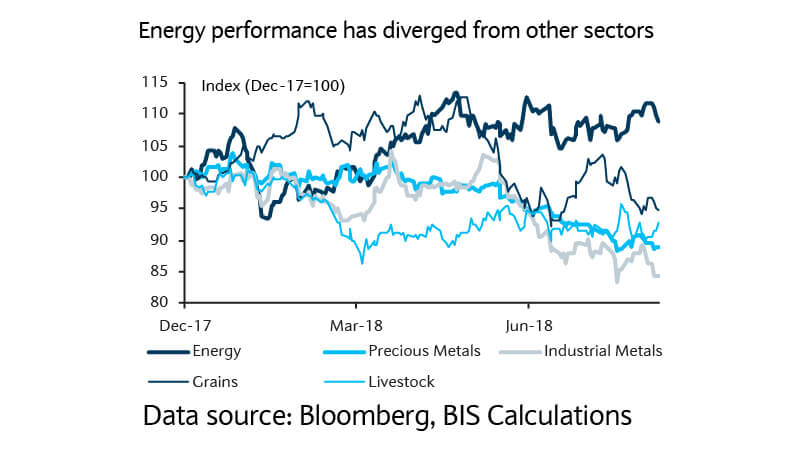 Within precious metals, the worst performer by far is platinum.

Since reaching a high of more than $1,000 an ounce in January, the price has consecutively decreased for eight months by over 20% to around $800, its lowest price since 2008.

The commodity – which is mainly used in emission-cutting catalytic converters for vehicles and jewellery – is suffering from a supply surplus.

Demand for diesel engines, which use more platinum than petrol engines, has been weak ever since the diesel scandal in which Volkswagen were found to have cheated emission tests.

On the supply side, South Africa’s mines, that produce around 70% of globally mined platinum, are struggling at current prices.

However, local currency weakness is alleviating some pressure for the country’s platinum industry. The rand, down more than 20% to the dollar since February, is inflating miners’ local currency earnings, cutting dollar-denominated costs and reducing the risk of mine closures.

Net negative speculative positioning has also contributed to the sell-off.

So platinum could bounce back if speculative investors – who have built the largest net short position in New York Mercantile Exchange platinum for at least two decades – reach the conclusion that prices have bottomed. However, amid the persistently weak fundamentals, the recovery potential is likely limited.

Copper and zinc are the two industrial metals that have declined by more than 20% this year (figure 2).

Some commodities have fallen more than 20% 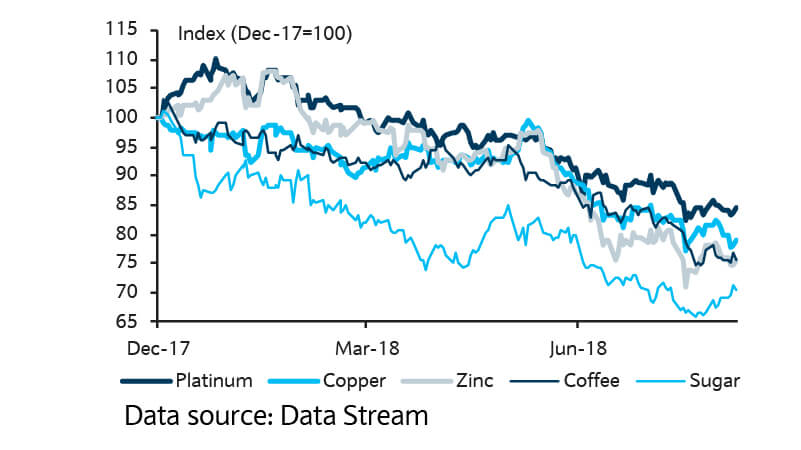 The fundamentals do not fully explain the degree of fall in prices.

Regarding zinc, expectations for a rise in concentrate supplies in coming years have driven down the metal price. While last year’s supply deficit of 460,000 tonnes is set to decline to around 260,000 tonnes this year, it nonetheless is still sizeable. Smelting capacity constraints also suggest that the sell-off is premature.

Storm in a coffee cup?

The remaining two commodities that have decreased by more than 20% year-to-date are coffee and sugar. For these commodities, mammoth inventories are weighing on the market. In addition, the recent plunge in the Turkish lira has played a role in creating the perfect storm for wider emerging market currencies. That’s putting a lot pressure on agricultural commodities as Brazilian and Colombian currencies drop, encouraging local producers to boost sales which fetch dollars in return. Brazil is the world’s biggest sugar and coffee exporter, and Colombia ranks second for Arabica beans.

Looking at the commodities that dropped considerably, copper clearly has the most favourable fundamentals. However, the US-China trade tensions are most likely impacting the copper price. Whilst the price has recovered from a recent rout, the possibility of the trade dispute between Washington and Beijing escalating and its potential to crimp demand in China, the world’s top consumer, is expected to cap gains.

This leaves oil as our favourite commodity.

As we highlighted in last month’s issue, price risks are probably on the upside, with impacts from Iran sanctions looming and the market facing the prospects of only limited remaining spare capacity.