Is the slowing Chinese economy a threat?

“There can be only one” - Highlander

Much western analysis of the Chinese economy comes with baggage.

In a world economy that is often perceived or caricatured as a winner takes all arm wrestle, the seemingly inexorable rise of China can only be a threat to our wellbeing in the west?

Those who would extrapolate the last 20 years into the next 50 find plenty to help them not sleep at night.

With this in mind, should we be celebrating signs that China’s economy has run into the sand in recent quarters?

What comes next and what does it mean for investors remain the most important questions to answer.

There can be little doubt that Chinese economic activity has slowed in recent quarters (figures 1 to 3). 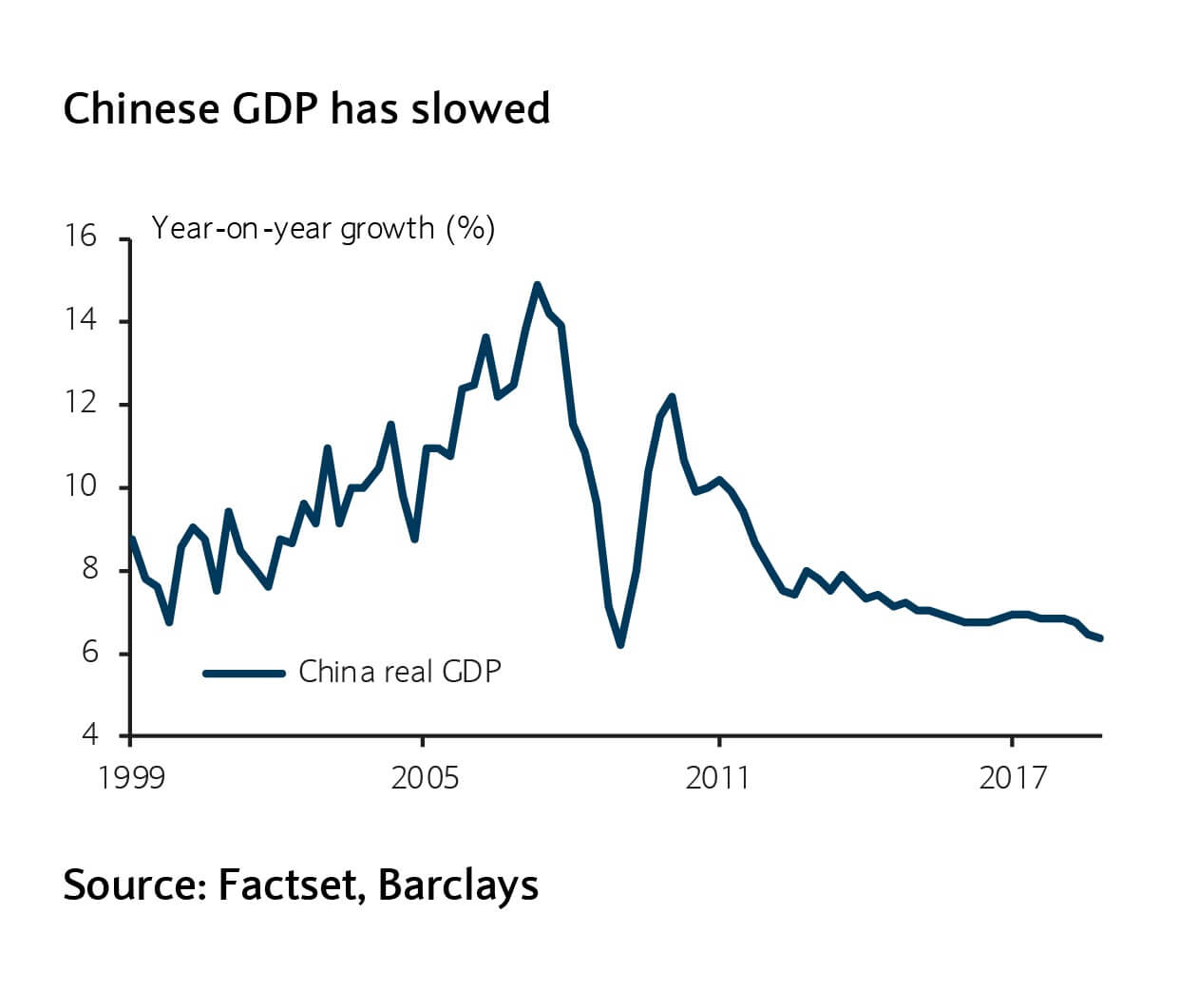 The scale of the slowdown differs depending on where you get your news. However, it is showing up everywhere from the sunken price of base metals to the earnings of western companies exposed to China. 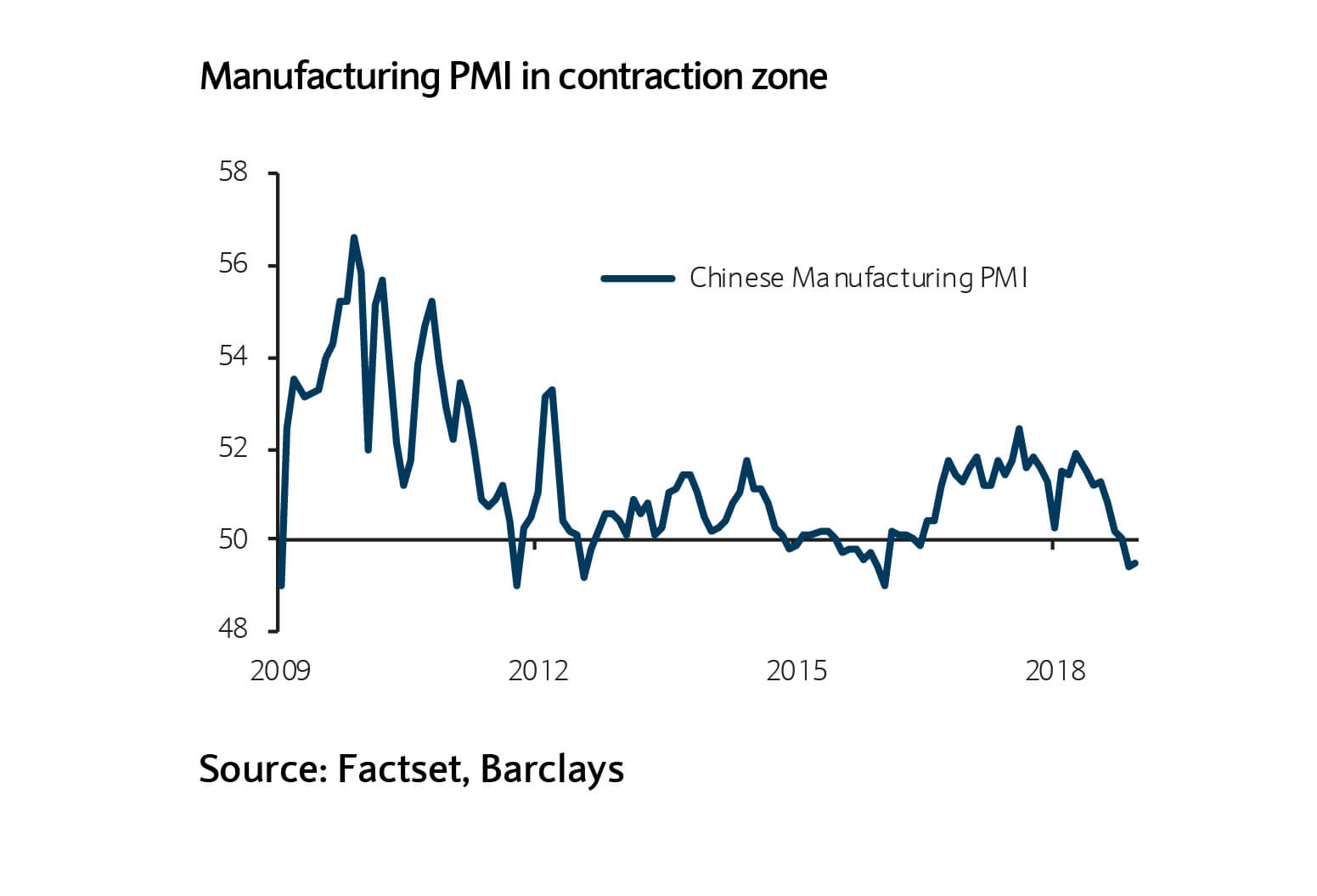 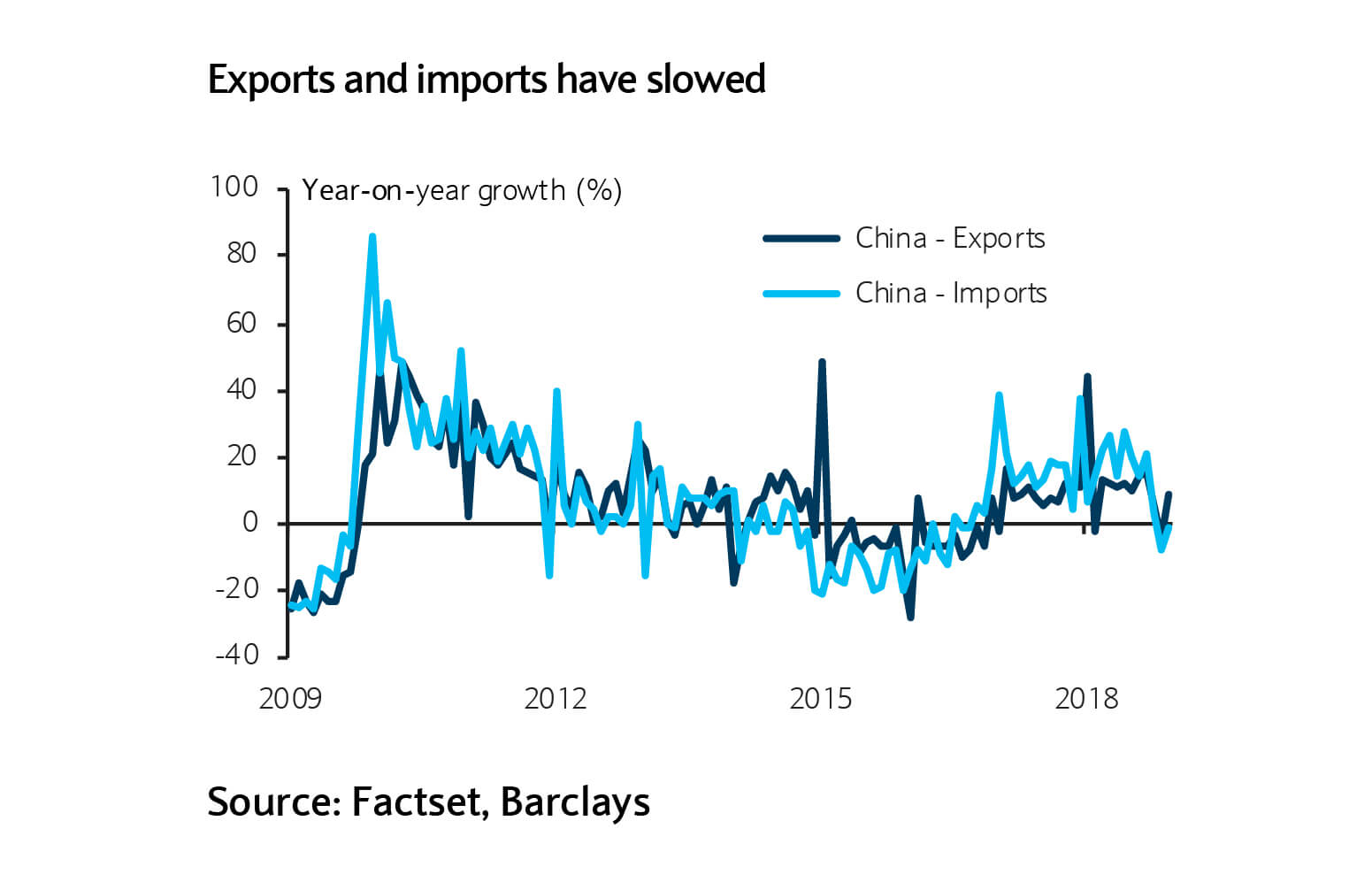 When we look for reasons, we can begin with domestic factors. For some time, Chinese policymakers have been trying to contain some of the financial stability risks that have arisen from China’s unprecedented stretch of sustained growth (figure 4). 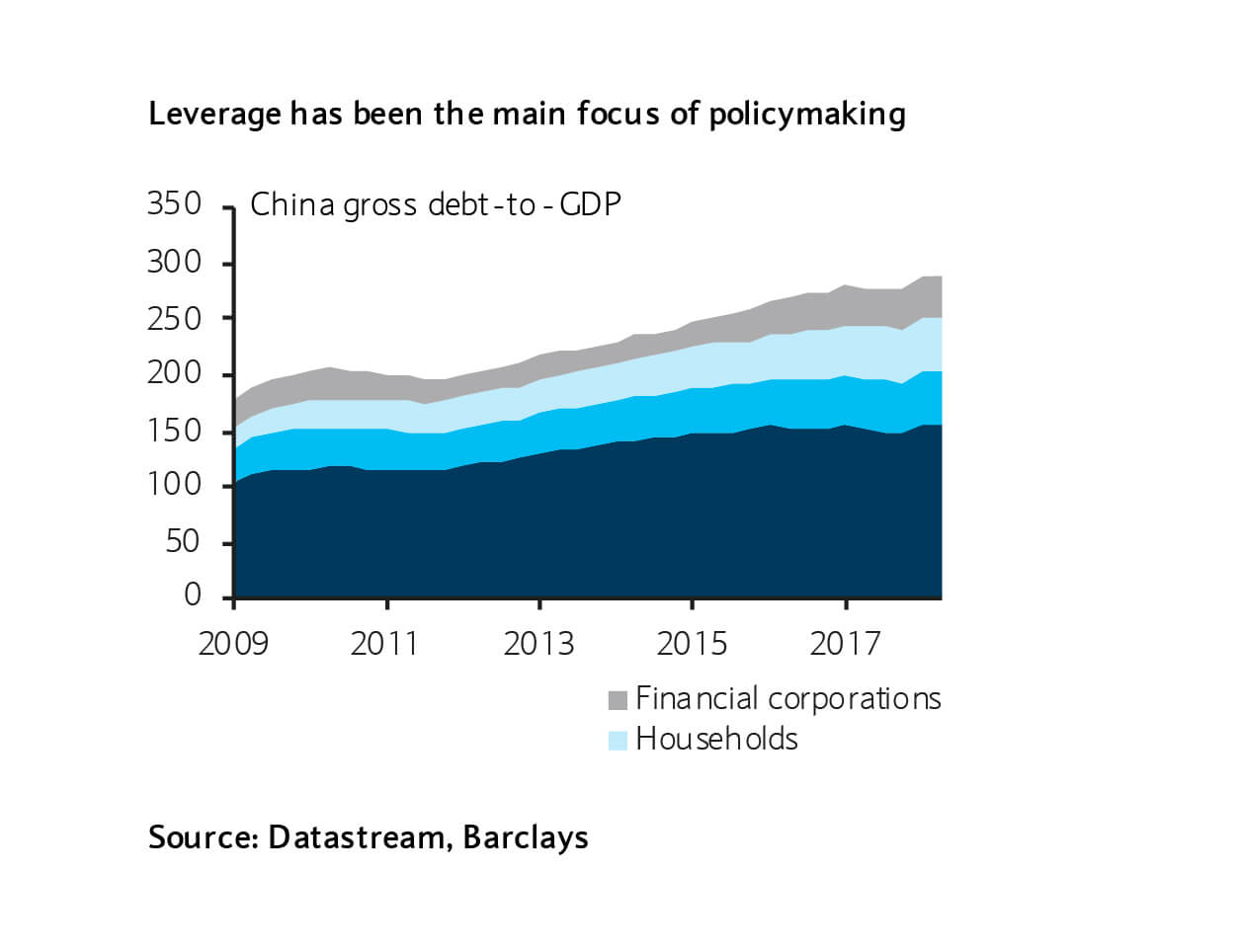 The ensuing financial regulations introduced in 2017 and early 2018 led to a meaningful contraction in some of the more unwanted parts of Chinese lending capacity, hitting private sector companies in particular.

Just as policymakers stepped a little harder on the brakes, the external environment got more difficult too.  Trade tensions stepped up and the global growth cycle peaked.

As a result, the economy has probably slowed a little more than intended.

In such circumstances, China may benefit from the fact that its policymakers, increasingly controversially, continue to sit at the commanding heights of the economy.

They simply have more levers to pull than many of their developed world counterparts, where market forces are allowed a much greater role in where resources are allocated.

If we think of the Chinese economy as a car, or perhaps an extremely large bus, where the authorities had been tapping the brakes, they have more recently been pushing the accelerator again.

The effects of this attempted re-acceleration have been taking a while to show up in the data for a number of reasons.

Many have highlighted that local government officials, who typically implement infrastructure spending and other forms of stimulus, are facing conflicting pressures in the context of the reforms of the last few years.

For a start, these officials are now accountable for the projects they approve in perpetuity. 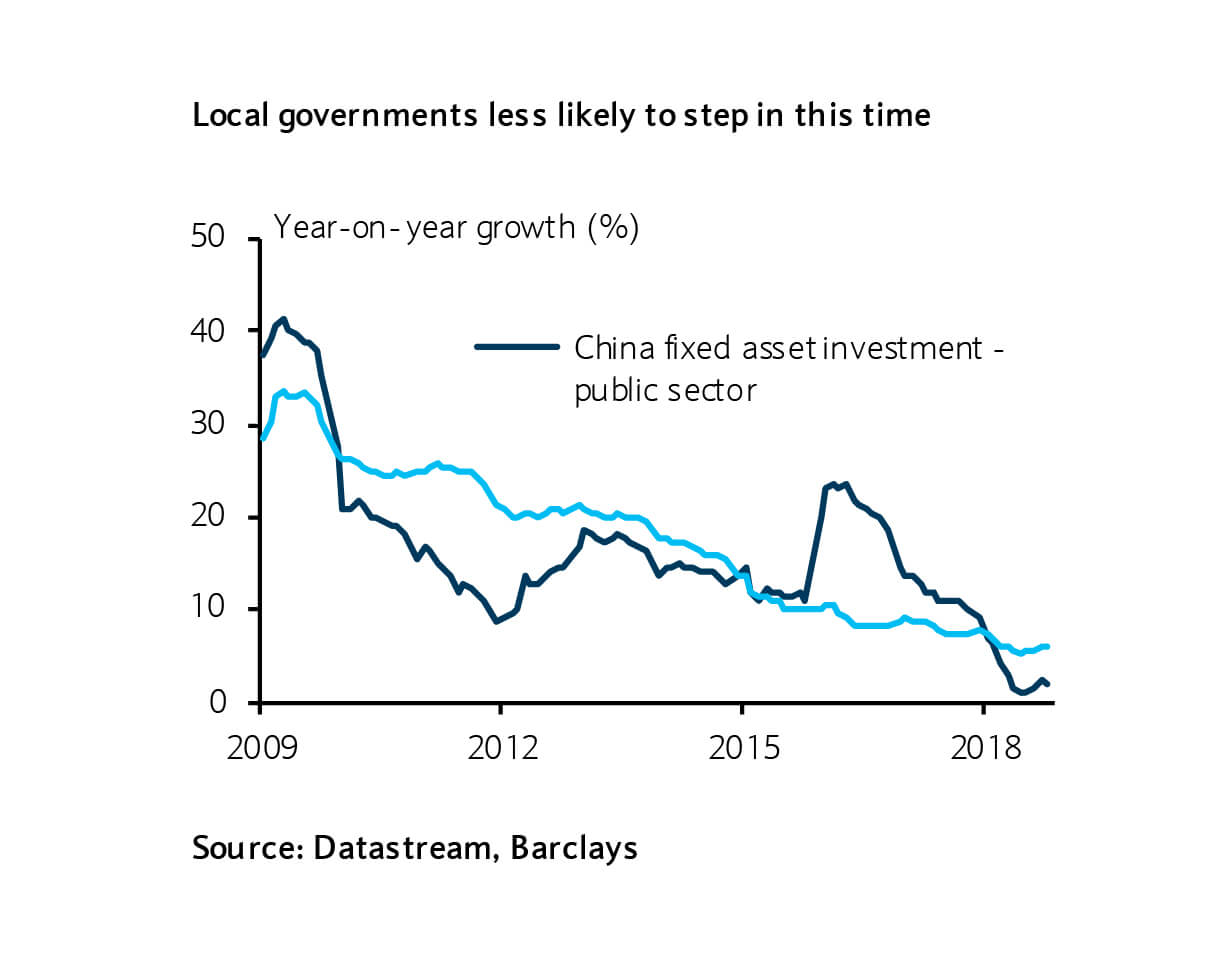 Perhaps understandably this has resulted in a little more reticence (figure 5).

Nonetheless, the last week has seen a slight turn in the credit cycle, suggesting that we may start to see a better tone to China’s data in coming quarters (figure 6). 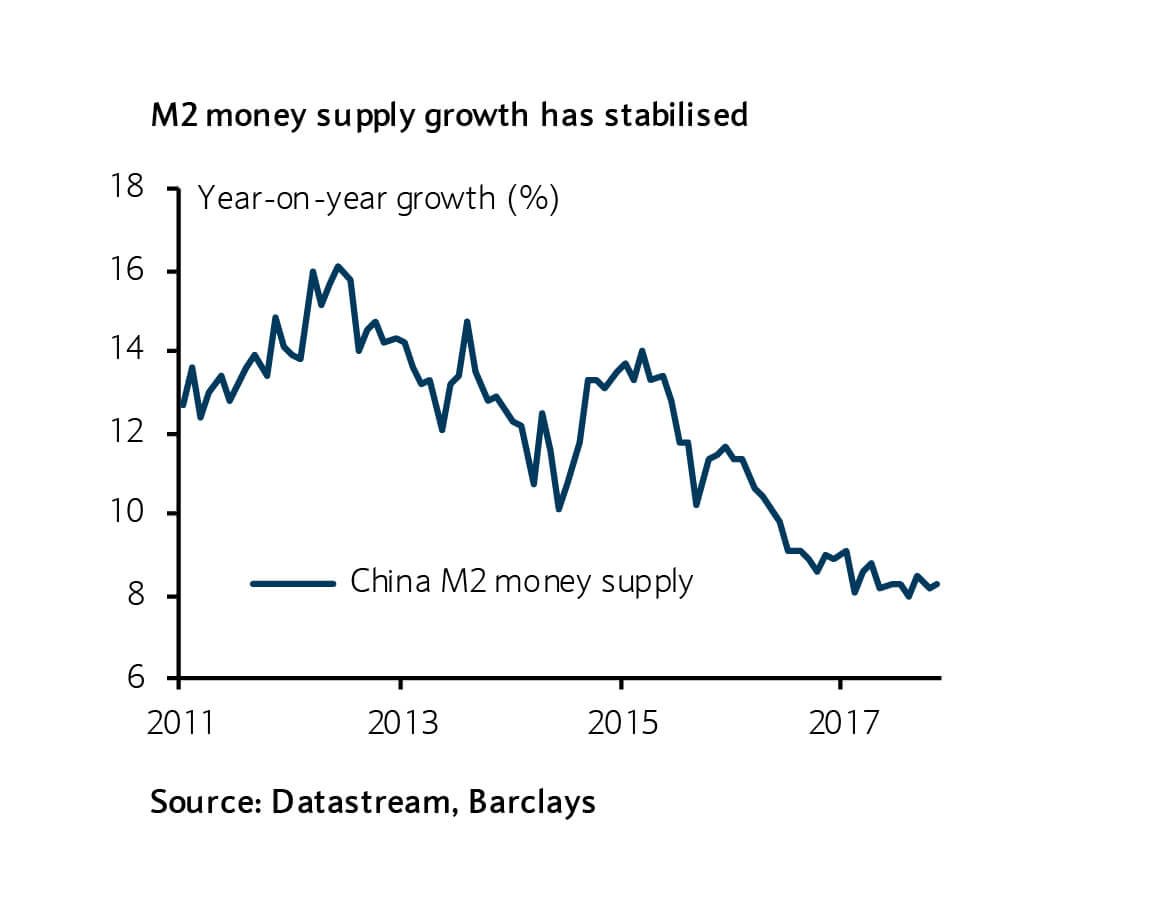 The caricature of the world economy as a zero sum arm wrestle is popular at the moment, but misplaced.

The last 25 years has of course seen an incredible proliferation in global trade and interconnection.

The caricature of the world economy as a zero sum arm wrestle is popular at the moment, but misplaced

While various studies tell us that there have been sufficient economic gains from this proliferation for all to benefit, the experience of emerging and developed markets have been very different, as the tone of today’s western political discourse perhaps illustrates1.

A disgruntled developed world, in part suffering the consequences of a more uneven distribution of these gains, seems to have found a common enemy in Chinese trade practices.

On the other side of the debate, some argue that in railing against protectionism and Intellectual property theft, many in the developed world are guilty of hauling up the ladder by which they themselves ascended2.

If we were transported back to the UK of the first industrial revolution, you might have heard similar gripes about a country thieving intellectual property, unable to build or innovate beyond mass producing low quality products.

However, this time it would have been the UK complaining about the emerging US.

Beware of extrapolation and opaque markets

There are several points for investors to take from this sprawling, evolving debate.

There are no foregone conclusions in the outlook for the world economy, not even a period of Chinese hegemony of the like the US currently still enjoys.

China’s growth and success in reducing domestic poverty in the last few decades comes as close to a miracle as the subject of economics will allow.

However, there is simply no precedent for a country of China’s size and complexity attempting to get to the next stage of economic development under even a similar political context.

How an administration clearly reluctant to relinquish further control of the economy will create the necessary context for domestic innovation and the wider private sector to flourish remains unanswered.

Second, it is in large part the revolution in information and communication technology of the last couple of decades that has brought developed world workers into direct competition with their emerging market peers, such as those in China.

Step changes in the ability to communicate quickly, cheaply and reliably with the other side of the world has decimated the previously prohibitive cost of co-ordinating production processes across far flung territories3.

Disentangling these technological advances from the forces of global trade and globalisation that many are fighting to reverse, is likely impossible.

Remember, for investors, these technological gains are the beating heart of the long-term returns from capital markets

Remember, for investors, these technological gains are the beating heart of the long-term returns from capital markets.

Finally, with regards to China’s near term path, we obviously want to be wary of overconfidence.

This is an opaque economy at the best of times.

However, we still see policy makers enjoying sufficient means to keep the show on the road and would expect the economy to brighten a little over the course of this year as already enacted measures bear fruit.

Trade tensions will not disappear, but a material escalation from here also looks a little less likely.

In this context, we still see emerging market equities as an attractive opportunity for the year ahead.