There was much to absorb in 2018. As per tradition, we use this final In Focus publication of the year to reflect on the lessons of the latest trip around the sun.

We’ve looked at the three key messages from 2018 that the Barclays Private Bank team thought were especially important.

The temptation to exaggerate the role of a box office trade skirmish between two global economic superpowers in the performance of capital markets has been undeniably strong this year.

The trade tussle, and of course Brexit, have dominated the airwaves for much of the year – how can they not be the most important factors to think about for investors?

Such media sway over capital markets would not be new either.

We are lucky enough to have behavioural specialists on hand to help us guard against some of our sloppier mental short cuts.

However, even they have struggled to prioritise the various storms that have buffeted markets this year.

A recent IMF study1 examining the effect of more than 4.5 million Reuters articles published between 1991 and 2015 found that news sentiment has indeed had a pervasive impact on short term equity prices around the world.

For example, Kalev Leetaru analysed sentiment in the New York Times from 1945 to the present day by focusing on the frequency with which positive words (like good or nice) are used relative to negative words (like horrific or terrible).

The results not only show that the ‘tone’ of news has become more negative over time, but that this trend has accelerated with the advent of social media2.

There is opportunity in all of this for the clear-headed investor. Biases can help dislocate asset prices from their intrinsic value, something that we feel has perhaps happened this year with emerging market equities in particular.

This is not to say that a further ratcheting up of trade tensions wouldn’t hurt the fundamental backdrop for emerging market and indeed global equities.

However, other factors, such as the mostly deliberate slowdown in the Chinese economy, and the move to a higher, fairer, trading range in US interest rates, have likely been more important in explaining the underperformance so far.

Importantly, both of these factors are likely to be less obstructive as we look to the year ahead. We explore this in more detail in the latest edition of Compass.

Even populists have to borrow

We have long argued that capital markets are an underestimated disciplinary force.

In the end, the more heavily indebted a government, the less leeway its politicians have to indulge the expansive fiscal gestures that may have helped them into office.

Of course, this doesn’t guarantee good governance, but those countries with the soundest, most plausible finances tend to be the same ones that get to borrow at the cheapest rate for the longest.

The new Italian government has been wrangling with the European Commission over its proposed budget for much of the last few months. 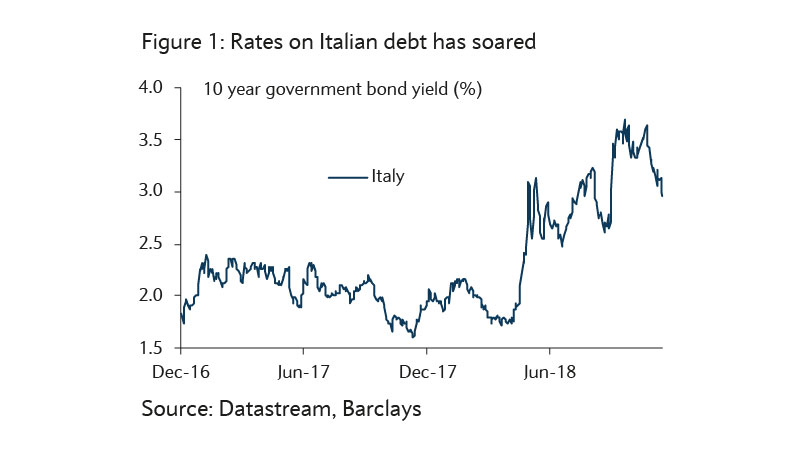 The last few weeks have exhibited signs that the new Italian coalition may be listening to the market forces a little more attentively, presenting the Commission with increasingly less jarring spending plans. European equities should benefit as this battle continues to subside a little.

At the centre of the first rout of the year in February were some financial contraptions designed to benefit from the low levels of market volatility seen over the near miraculous calm of 2017.

Essentially, these products were selling insurance to those afraid of the return of the rollercoaster.

As with all types of insurance, the return to those selling it is stable and positive until suddenly it is large and negative.

Premiums roll in month after month until the insured-against event occurs, and a sharp loss ensues.

Given the prolonged period of subdued market volatility, it may be that some of these unwitting ‘insurers’ had forgotten exactly what risks they were covering.

Most of the exchange traded notes (ETNs) which granted exposure to such volatility insurance were closed, and heavy (and permanent) losses were inflicted on their unfortunate investors (figure 2). 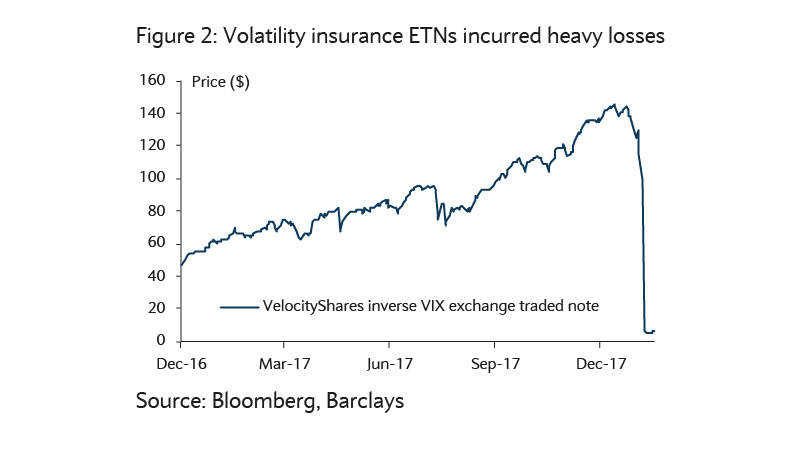 The lesson here is that we are instinctive extrapolators. When things are going well, it seems to become harder to imagine anything bad happening; the converse is also true.

As we previewed 2018 a year ago, we, like many in the industry, correctly identified some of the major storm clouds that would make for a trickier year relative to 2017. 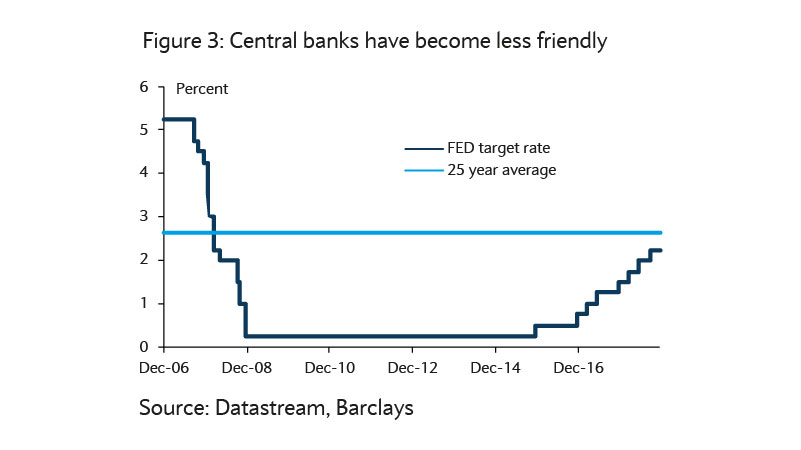 Central bankers and bond markets would be less friendly (figure 3), global economic growth would be less synchronised (figure 4), and elevated sentiment would provide very little cushion to absorb the unknown bumps and shocks that lay ahead. 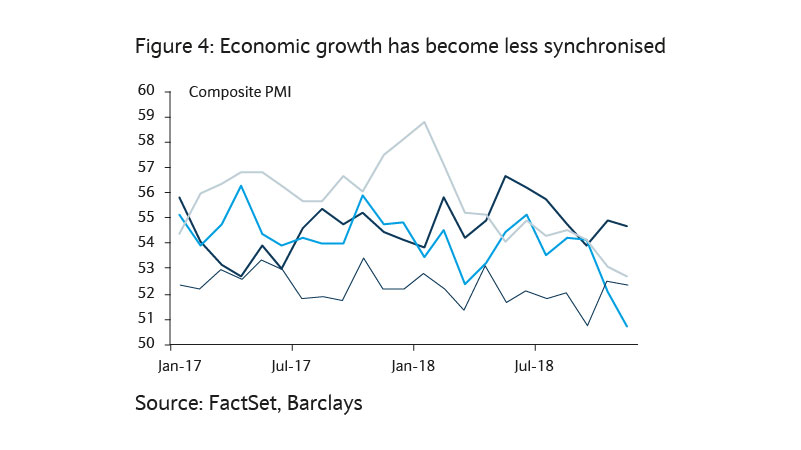 However, the spectacular implosion of volatility insurance, which was essentially selling a belief in perpetual calm, perhaps illustrated the difference between word and deed for many in the market.

This In Focus publication now breaks for the festive season and resumes in the week of 7 January 2019.

As always, this issue comes with the team’s best wishes for the festive period.