A turbulent couple of months have been witnessed by oil markets. The price of Dated Brent crude oil fell a whopping 34% from a high of US$86 per barrel ($/bbl) on 4 October to a low of 57 $/bbl on 23 November (figure 1).

This produced high expectations for the Organisation of the Petroleum Exporting Countries (OPEC) and OPEC+ meetings in the first week of December.

After a quite difficult meeting, OPEC and OPEC+ (an allegiance between OPEC and 10 other countries exporting a smaller amount of oil) agreed to cut their supply without providing country-specific allocations.

The cut will be pro-rated at 2.5% for OPEC countries from that baseline level - effectively a reduction in supply of 800 thousand barrels per day (kb/d), and at 2% from non-OPEC signatories of the Declaration of Cooperation.

Whilst the OPEC press statement makes no mention of exemptions from the deal, OPEC president and UAE oil minister Suhail al-Mazrouei confirmed that Venezuela, Iran and Libya will not make cuts because they have ‘special circumstances’.

Nigeria, which was exempt under the previous deal, will participate in this round of cuts.

The official line is that Iran and Venezuela were both exempted because they are still under US sanctions – Iran over the nuclear deal and Venezuela over the destruction of democracy and human rights violations. Libya has been given a pass due to its chronic production outages.

Because these three members have been given exemptions, the remaining OPEC members will have to cut more.

Overall this is a 1.2 mb/d reduction for the entire OPEC+ group from October levels.

As November production was higher than October’s, the effective cut from November levels is close to 1.5 mb/d.

The production agreement is for an initial period of six months and will be evaluated in the next meeting in April 2019.

With some days to digest the specifics of the OPEC+ deal, most analysts have so far seen the result a success in terms of amount and baseline.

Further, there is a cut of 325 kb/d of production in Canada’s province of Alberta starting in January, until surplus inventories are drained.

Together, this should help roughly balance crude oil markets in the first half of 2019.

The downwards trend in oil prices has clearly been stopped and a re-bound seems possible. The question is how fast such a bounce could happen.

Whilst the market reacted positively immediately after the OPEC+ decision, oil prices have fallen back again the following trading days.

Realistically, hard data on reductions may be necessary before oil prices can really climb higher.

A normalisation of inventory levels that are currently in excess of the five-year average, will take time to materialise.

A contributing factor was the announcement by Russian Energy Minister Alexander Novak announced that his country will cut its oil output only gradually over some months; cuts in January might only be 60 kb/d.

In contrast Saudi Arabia will cut output to 10.2 mb/d in January, down 0.9 mb/d from November levels. 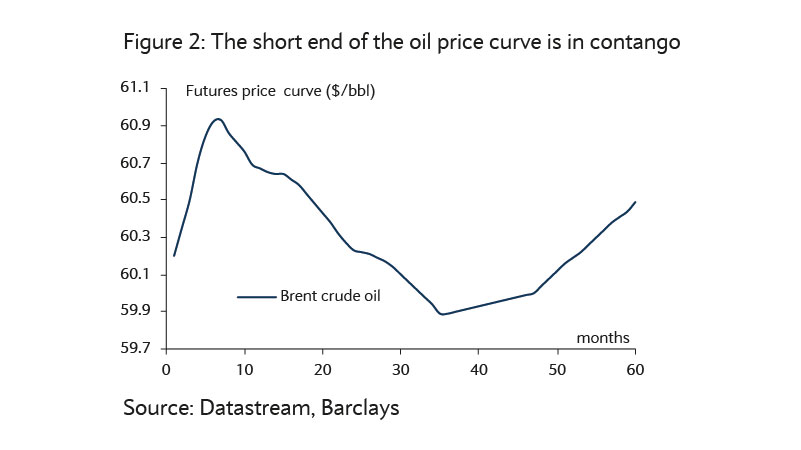 For the moment, we retain a low conviction on both oil prices and the wider commodity complex, which remain neutral in our current asset allocation.

This is despite the short end of the price curve being in contango (figure 2), which implies a negative roll yield for investors. The main risks are that the actual OPEC+ supply cut turns out to be less than expected or that global demand disappoints.