The return of the strong man

The strong man is apparently back – beards are all the rage and so is authoritarian leadership with all its whim and caprice.

Many of the institutions and norms deliberately built up over the last two hundred years to shackle such alpha males are now being sacrificed on the altar of populism. Should we care? What’s wrong with strong leadership anyway?

In this article, we explore current trends towards authoritarian populism in the context of the last millennium.

New studies of the performance of the world economy over the last millennium further burnish the role of institutions, both formal (parliaments, judiciaries, central banks, social safety nets and schools) and less formal (guilds, trade unions and charities), in its success.

It has long been accepted that economic growth and rising living standards are a relatively new phenomenon.

Prior to the 18th century, the world economy flatlined; from generation to generation, living standards barely budged.

Then from around 1750, output per head suddenly took off and has kept on rising ever since, growing at around 1.5% per year (Figure 1).

The miracle of compound interest means that the time that it has taken over this period for living standards to double has been around 50 years vs. around a millennium for the same trick to be pulled off prior to 1700.

This growth take off has coincided with other happy trends: infant mortality rates have almost halved since the end of the 18th century (Figure 2); the estimated human lifespan has doubled. 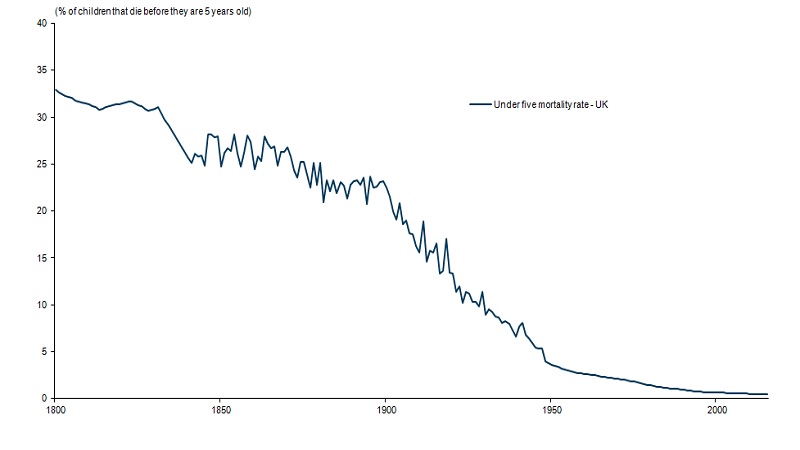 What changed in the middle of the 18th century?  Previous answers have centred on a change in the nature of innovation.

It was originally thought that humanity escaped stagnation through an intense period of advancement known as the Industrial Revolution. During this time, ideas like the spinning jenny and the steam engine finally freed us from our physical and geographical constraints, thus propelling us towards a path of technologically-driven growth.

However, a new study of the entire millennium suggests a broader explanation1. Using higher frequency measures, it was found that while growth up until the mid 18th century did indeed flatline on average, there were significant swings within it (Figure 3). 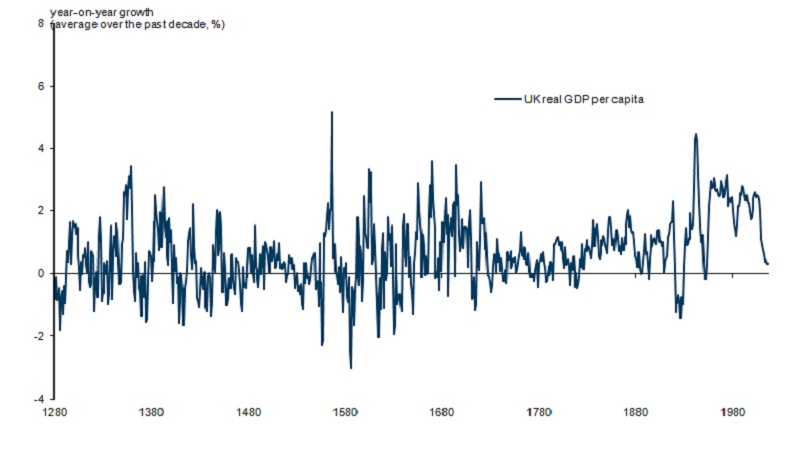 The reason that average growth was far lower during this period was not so much an absence of growth, but because expanding periods were almost exactly offset by contracting periods. In fact, the average rate of growth in expansion periods after the Industrial Revolution was lower than the average rate preceding it.

To better understand the foundations of long-term growth, we need to explain why economies have become less prone to recessions.

The most plausible explanation seems to be twofold: the emergence of institutions that cushioned the damaging effects of recessions (welfare systems, central banks), and those that improved political stability2.

The latter is an especially important condition for long-term growth, as it allowed inventors and entrepreneurs alike the freedom to focus on innovation, rather than having to worry about having their livelihoods appropriated by unrestrained monarchs, corrupt bureaucrats, or even the unfriendly tribe next door.

More importantly (and reassuringly) it paints a more sustainable picture of long run growth. Productivity is not something man (and woman) kind discovered in the last few centuries, likely to stall as suddenly and unpredictably as it started. It is likely a much longer, more durable truth of the world economy.

What has changed is simply that we now have the institutional framework to better harness and protect the gains.

What does this mean for investors today?

This new understanding of economic history puts the thoughts of techno-pessimists, who argue that we’ve reached our productive peak, on even shakier ground.

In terms of a practical application, it again argues for putting as much of your hard-earned money to work for the long term in capital markets, particularly stocks (Figure 4), as your risk appetite and financial plans will allow. 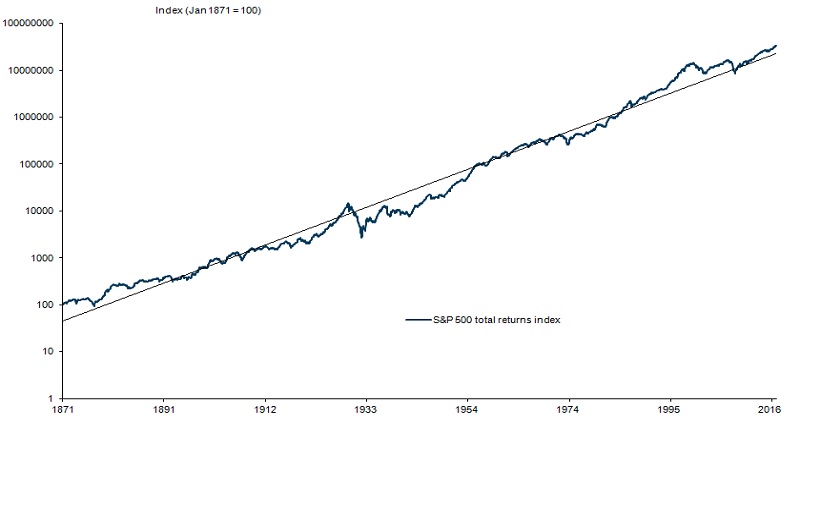 There is of course a ‘however’.

While our hunch is that the current populist spasms will pass, being in large part a function of world views that younger parts of western electorates do not share – if this were not to be the case, and the institutions and norms that enabled our prosperity were eroded, then this lesson from the long sweep of history will be a salutary one – recessions could again become more frequent and severe, growth not so much the norm.

US citizens (and the world’s investors) could quickly find that Turkey is not just a Thanksgiving feast, but a vision of the future.