The monumental shift in the way we communicate and access information and entertainment has prompted media, telecoms and internet firms to become far more integrated through mergers and acquisition.

Many now offer overlapping services such as cable, internet and phone.

To reflect this rapid evolution, Modern MSCI indices is changing the Global Industry Classification Standard (GICS) structure that will affect three sectors – a change that will dramatically reduce the traditional IT sector.

Some parts of the IT and consumer discretionary sectors will merge with the existing telecoms sector to form a new sector classification – communication services.

The ‘consumer discretionary’ sector’s stocks are mainly involved in media and online retail.

Within the IT sector, stocks that are moving into the communication services bracket include those involved with internet software and services, application software, as well as home entertainment software.

These will shrink the IT sector, which has swelled to account for about quarter of the total market value of the S&P 500 thanks, in part, to the meteoric rise of the companies such as Facebook, Apple, Amazon, Netflix and Alphabet’s Google (FAANGs), to about a fifth.

What is left of the IT sector will have a greater weighting towards hardware companies, including Apple, as well as chipmakers and traditional tech giants like Microsoft.

The US will be affected most, with 67 out of 200 re-classified stocks coming from that region. It’s the only area in which the original telecom stocks will make up a small minority of the new Communication Services sector (figure 1). 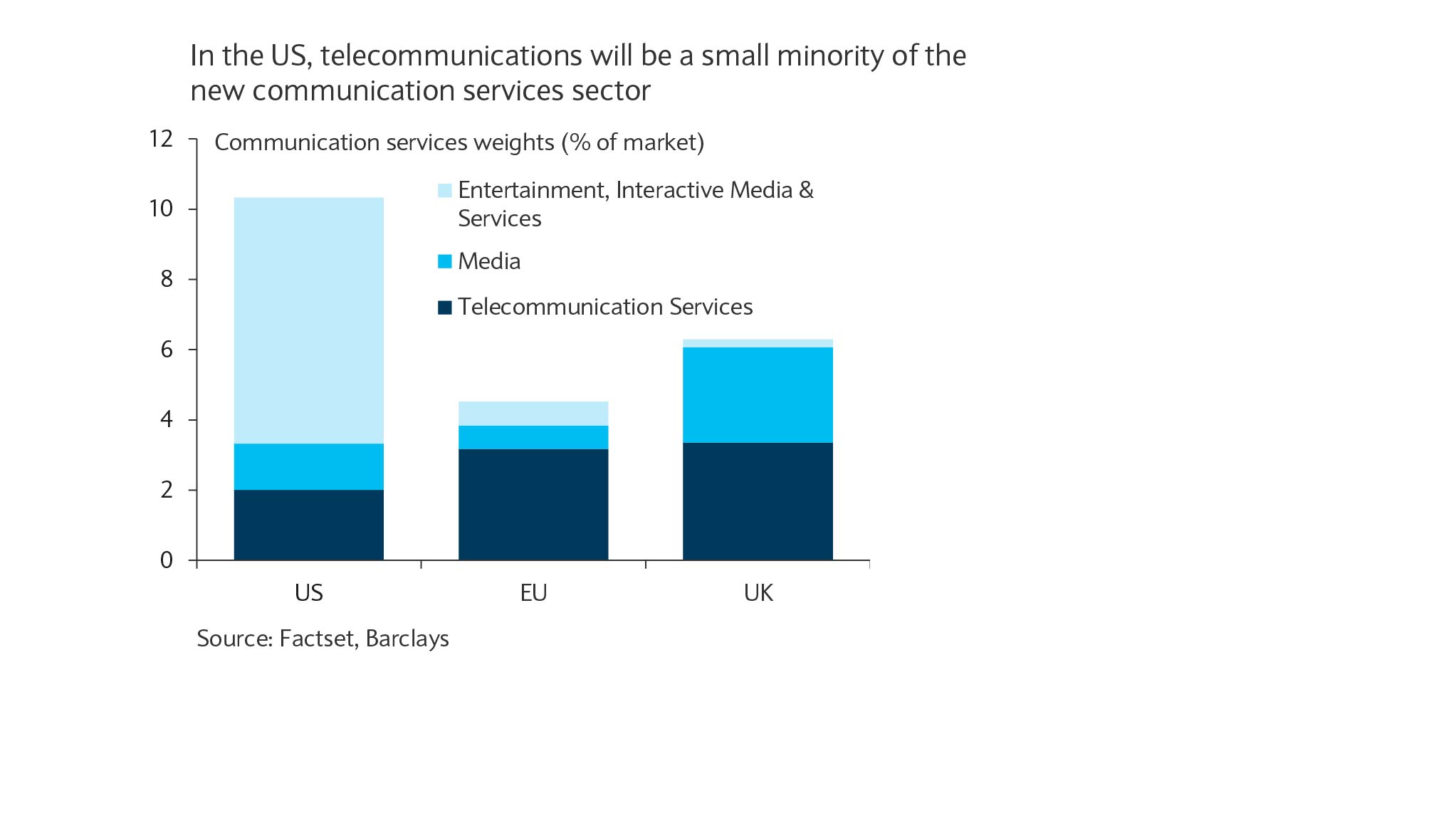 Rather, entertainment and interactive media and services stocks will now dominate. The implication is this is that the US communication services sector will be far less defensive than the old telecoms sector.

The majority of the new sector will be leveraged to advertising, thereby giving it a higher beta to the overall market than the current sector.

The addition of fast-growing interactive media companies such as Google, Facebook, as well as entertainment services providers like Netflix will mean that the new sector is tilted towards growth instead of value.

Confirming this change in character, MSCI is officially classifying the new sector as cyclical.

However, profits will still be more stable than other cyclical sectors given the subscription-based business models of cable companies and license fees earned by content providers and broadcasters.

Return on equity will increase and the aggregate balance sheet of the sector will be strengthened due to the highly profitable business models of internet and social media companies and the large cash balances they hold.

How attractive is this new segment?

We will, at the margin, be more positive on the US’ new Communication Services sector compared to the old telecoms sector but not sufficiently to raise it above a neutral position. Our preferred US sectors remain industrials, financials and IT (figure 2).

Note: A zero indicates a neutral or GICS benchmark position

We go neutral on healthcare from underweight, due to its good earnings growth and move to an underweight in real estate instead.

Less favourable supply/demand conditions in some real estate investment trust (REIT) sub-categories have started to push up vacancy rates and led to a corresponding slowdown in rental growth in recent quarters.

For Europe and the UK, the impact of the classification changes will be less pronounced. Telecoms remain the dominant industry group, mainly supplemented by media.

While the new sectors can’t be characterised as bond proxies, they currently display low and decreasing forward earnings growth, low return on equity, and price-earnings ratios just in line with history.

We maintain our negative sector stances for these regions, being more positive on industrials and financials.