Betting on reversal: emerging markets vs. the US

It’s been a tough year so far for emerging market (EM) equities, despite some tentative signs of stabilisation at the end of the third quarter.

EM equities have suffered a drop of about 14% in US dollar terms, year-to-date. Relative to US equities - the best performing region of 2018 so far - this underperformance is even starker, at close to 20% (figure 1). 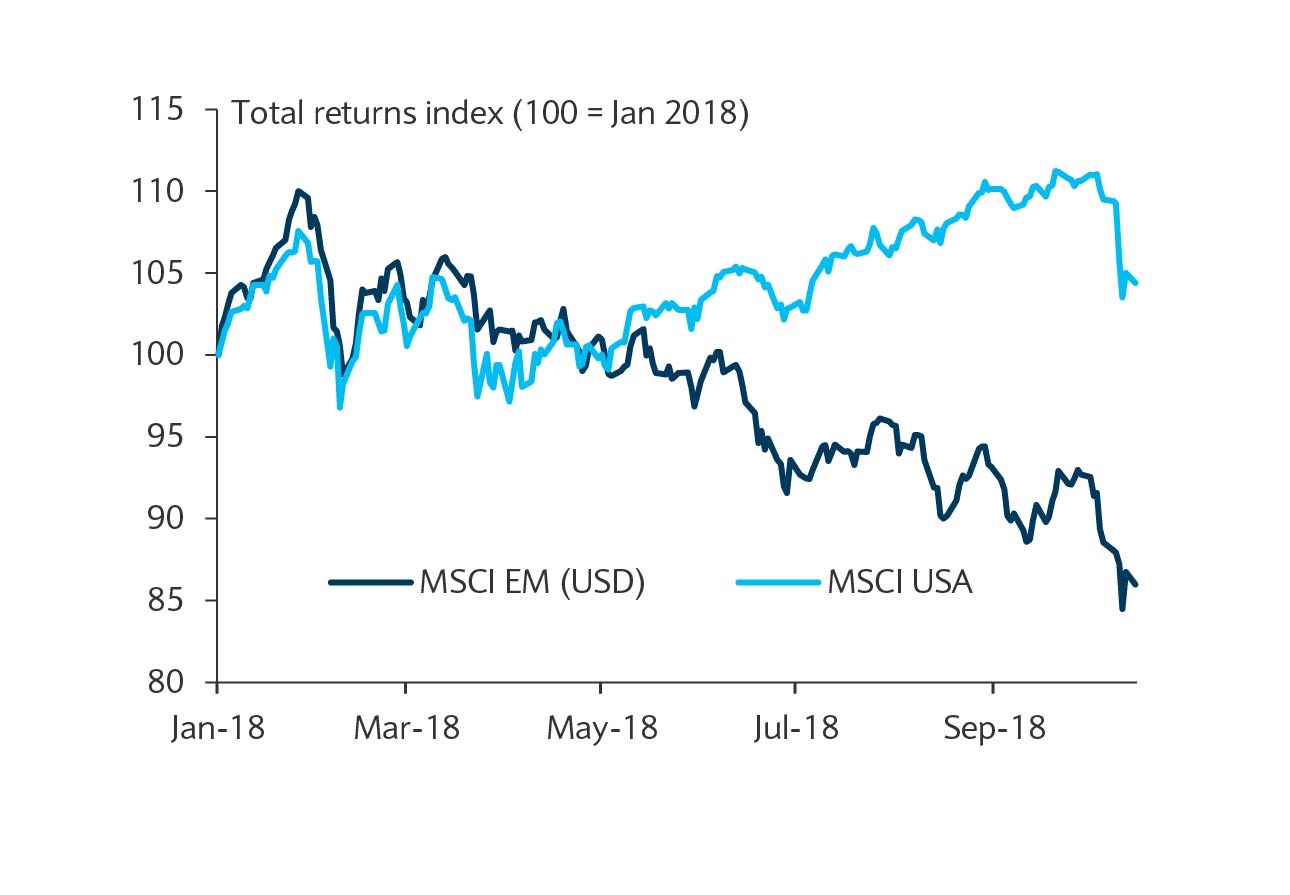 In this article, we’ll discuss some of the key drivers behind EM’s underperformance relative to US equities, and the likelihood of a reversal.

First, we’ve seen a further escalation in trade tensions. The Trump administration has so-far imposed tariffs on US$250bn worth of Chinese imports, all the while threatening to further widen the scope of those tariffs.

This escalating scrap between the US and China has weighed disproportionately on EM, given the region’s heftier role in global supply chains and leveraged exposure to trade. Throughout the first half of 2018, we’ve seen EM markets consistently underperform in response to headlines regarding trade tensions – evidence of its role in EM underperformance.

Second, EM equities have been hurt by retreating Chinese growth forecasts. Chinese macro indicators – particularly those trying to read the so-called ‘old economy’ – have slowed since Q1 in response to the government’s deleveraging campaign.

This campaign has had some success in stabilising debt ratios.

However, it has also tightened liquidity and reduced credit availability, weighing on short-term growth. These two reasons alone have weighed particularly on EM Asian equities – the largest part in the overall EM index (figure 2). 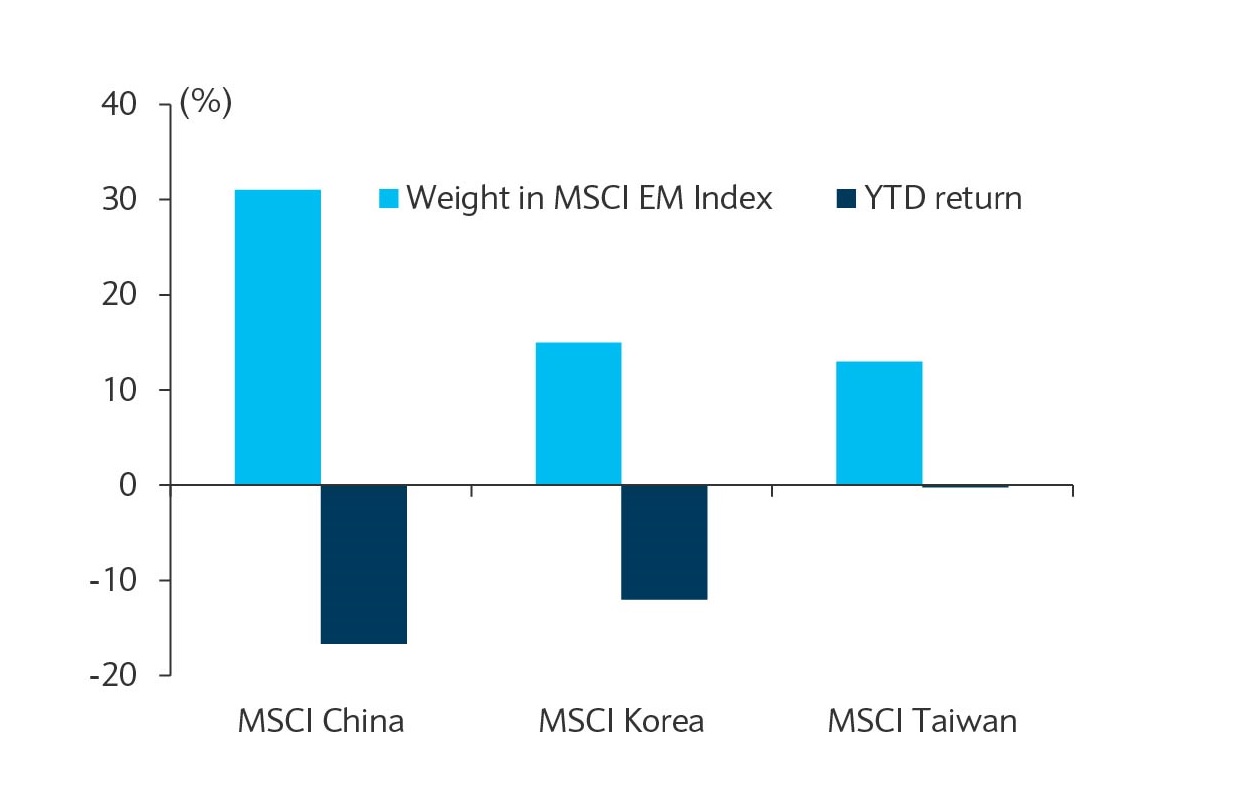 Third, EM currencies have generally depreciated against the dollar this year, further denting the returns received by investors relative to US equities.

The currency crises experienced by certain EM economies, such as Argentina and Turkey, have done no favours for the wider asset class, with the currencies of other vulnerable EM economies (Indonesia, South Africa, Brazil) selling off as well. As shown in figure 3, roughly one-third of EM’s underperformance this year can be attributed to foreign exchange (FX). 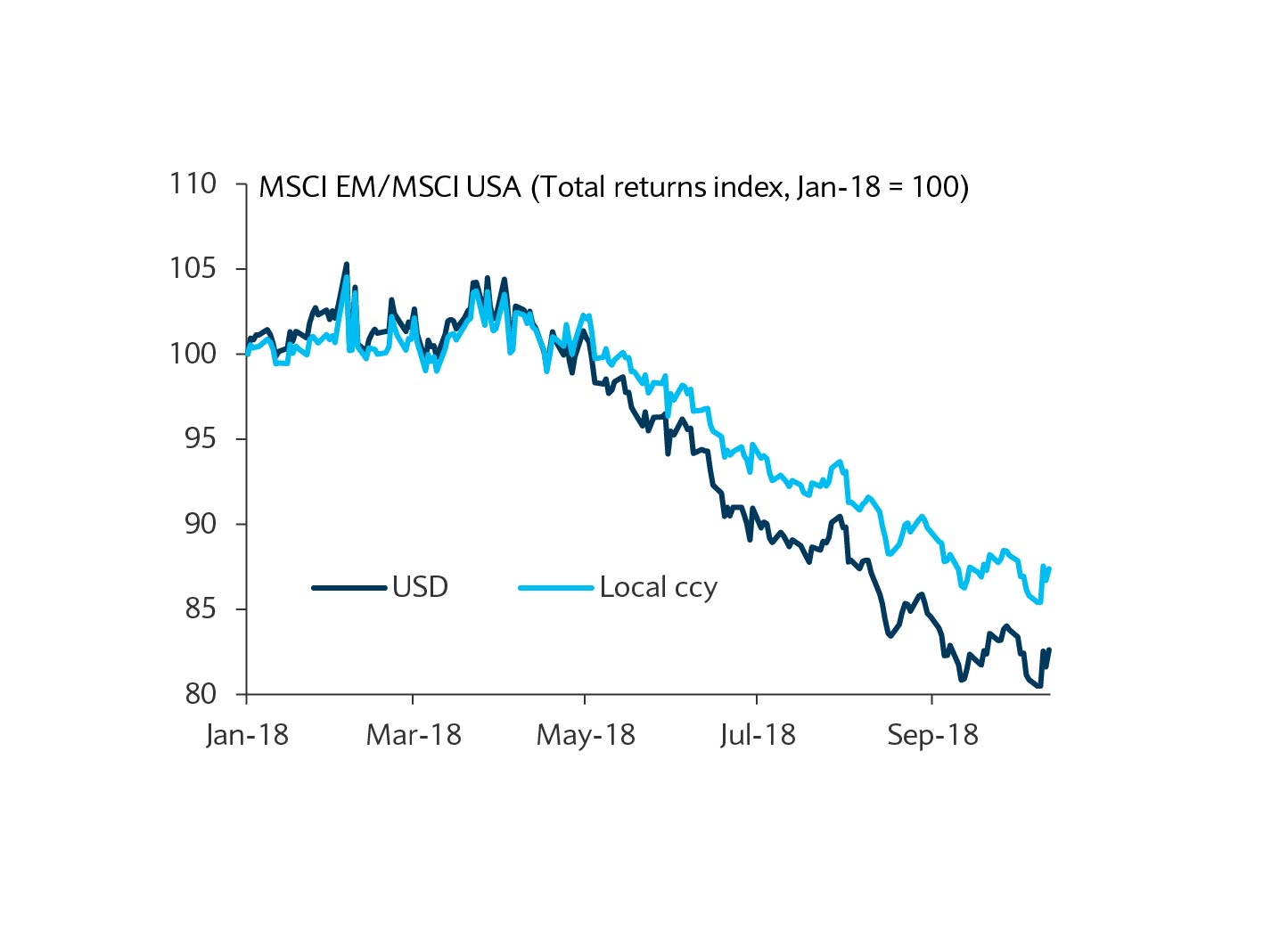 Fourth, EM underperformance has also been driven by weaker earnings momentum relative to the US.

With the benefit of hindsight, a lot of good news has already been priced into EM equities coming into 2018, making it increasingly vulnerable to a moderation in earnings expectations.

Despite remaining in positive territory, we’ve seen EM EPS growth expectations slow versus the US as the year progressed (figure 4), which further exacerbated EM underperformance. 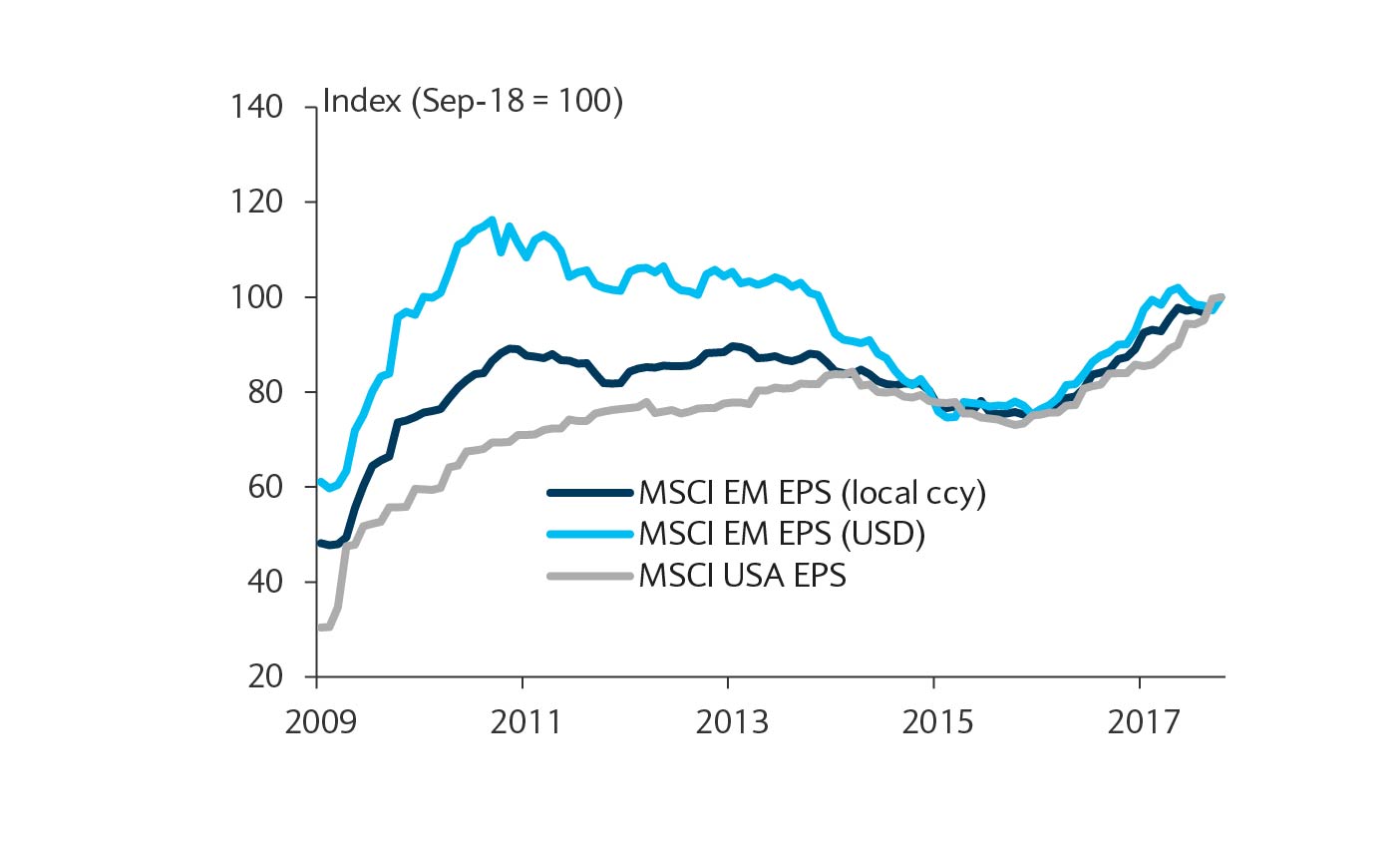 First, the divergence between EM and US equities look overstretched to us.

The relative underperformance of EM equities is the largest since the 2013 Taper Tantrum or the global growth scare of 2015/2016 – episodes in which the macro backdrop for EM was arguably less favourable than the one we see today. 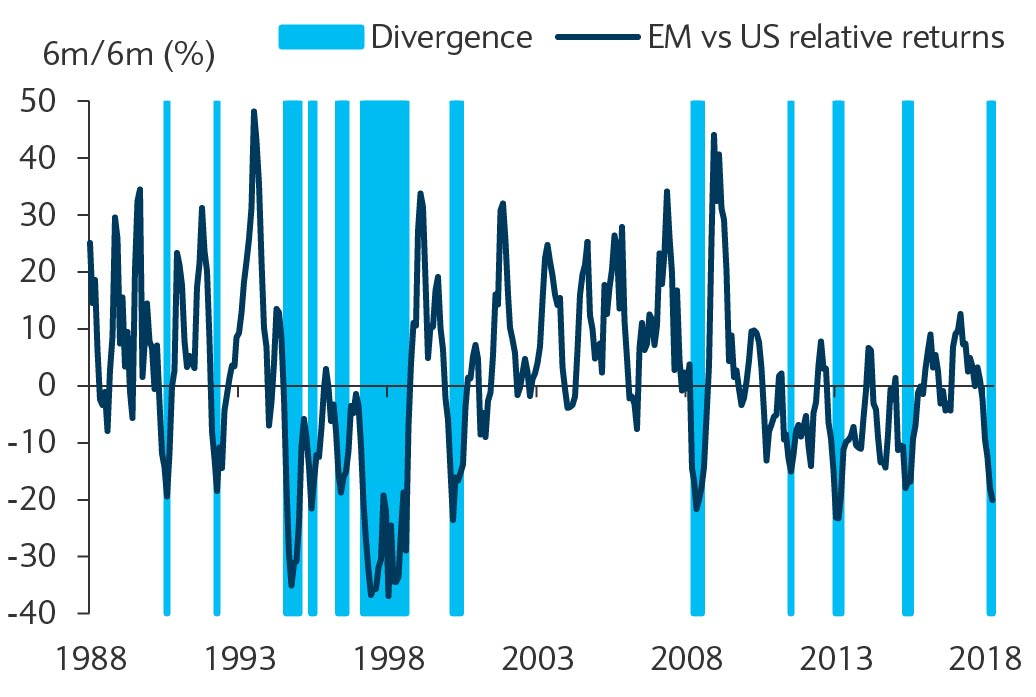 Second, divergences of such magnitude usually reverse in favour of EM. While history isn’t always predictive of the future, it does provide us a guide of how to put similar events into context.

EM/US divergences like these aren’t common, but neither are they unprecedented.

Since 1988, we’ve seen witnessed roughly 10 divergences of similar magnitude. On average, these divergences usually take place in a span of seven to nine months, with EM equities eventually rallying or outperforming more than half of the time.

The only times when EM continued being sold off heavily was in the 1997 Asian Financial Crisis or the bursting of the Tech Bubble – a repeat of either scenario seems unlikely to us right now. 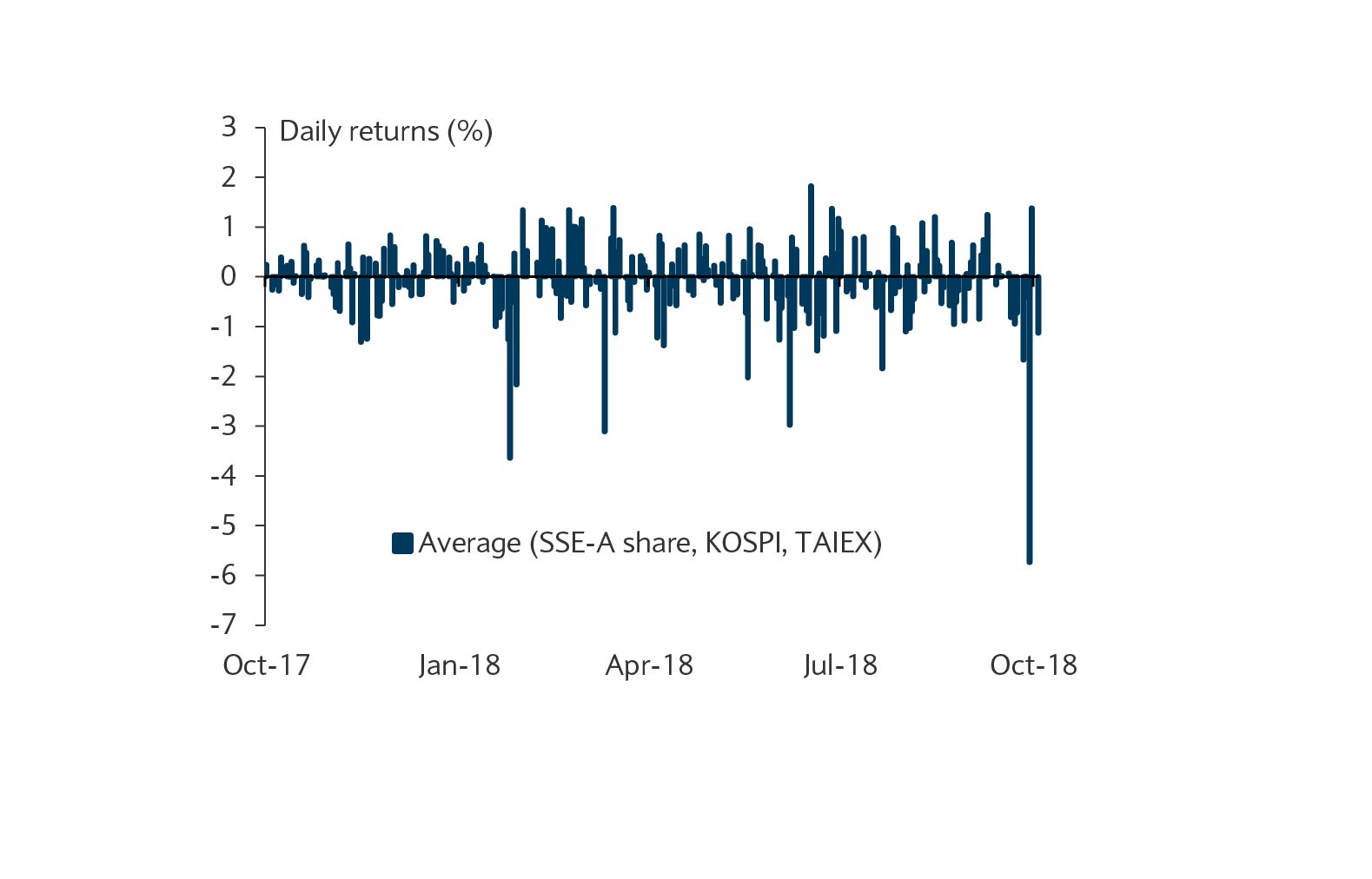 The magnitude of these falls was two to three times larger than what we typically observe on a daily basis (a two to three standard deviation move in industry jargon).

To put things into perspective, the initial trigger for the selloff – a 20 basis points spike in US Treasury yields – was roughly equivalent to a one to two standard deviation move.

That EM stocks fell by two standard deviations in response to a two standard move in US yields, seems like a disproportionate reaction in part of the former, lending evidence that investor sentiment has become excessively negative for EM.

Finally, we think that further upside in US equities looks increasingly limited to us.

The US’ outsized gains relative to other markets suggests that a lot of good news, whether earnings or macro-related, has been priced in already.

This makes US equities increasingly vulnerable to a correction should the data moderate, in our view. On balance, US equities now look less attractive versus EM from a risk/reward perspective.

Betting against momentum is never easy

As always, there will be some degree of uncertainty when it comes to the above-mentioned factors.

For example, the determination of how much good/bad news is priced in will inevitably require some subjective interpretation.

However, we think that cumulatively, these reasons provide a sufficient case to bet on a reversal of this divergence over the next six months.

We have recently altered our Tactical Asset Allocation based on this view, taking profit in our long-held overweight in US equities, and using part of those proceeds to increase exposure in EM.