Oil’s sharp price correction in Q3 would suggest that we can expect economic downturn, but the price of gold suggests otherwise.

You need gold when it’s not.

Many investors take the next step and make inferences about the state of the economy from the path of commodity markets.

To such analysts, the arrival of the sharp correction in oil prices hinted at in last month’s expanded In Focus must be a source of wider concern?

However, if it is, then gold doesn’t seem to have got the message?

In a world seemingly beset with more than usual levels of monetary, economic and even political uncertainty, gold, with its thousands of years of practice at being a store of value, seems to shine brightly as an investment prospect to some.

The idea of what actually constitutes a safe asset would probably differ from person to person, however most would agree that a safe asset should have a relatively stable value during times of market stress. 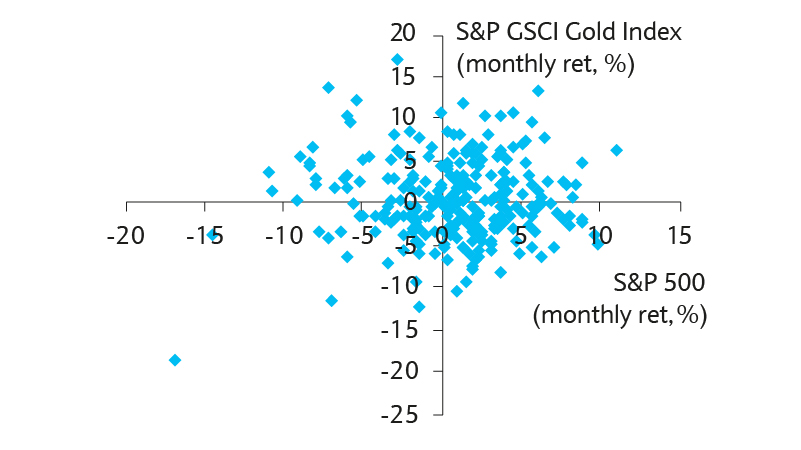 If we assume that such times tend to see equity markets fall sharply, figure 1 illustrates that gold’s historical record over the long run is far from perfect on this count, particularly relative to a true safe haven, US three-month Treasury bills as seen in figure 2. 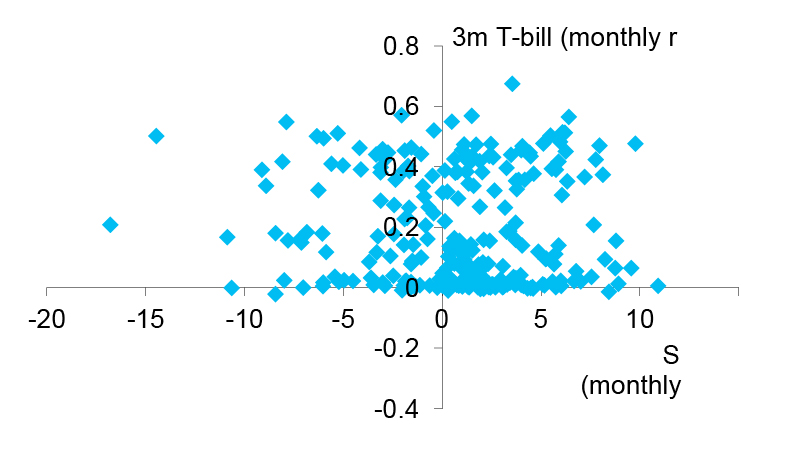 Since the crisis, valuations of many perceived ‘safe-haven assets’ (for example, German Bunds, Swiss Franc, gold) have been bid-up.

However, with the global economy in much better health today, medium-term expected returns for these assets should be low relative to other risk-on assets.

An inverse relationship between real yields and the price of gold has been observed in the past.

On balance, the recent uptrend in US real yields would naturally weigh on the near-term gold returns.

Patience is a virtue… most of  the time

Gold’s role as an inflation hedge has drawn plenty of academic work.

Roy Jastram (1978) for example, famously suggested that gold has been a poor inflation hedge in the short run, but over a century, it has done a better job.

Patience is surely an important trait in investing, as we are regularly at pains to point out, however this may be stretching it.

For the more relevant short-term time frame, if gold provided decent inflation protection, then its inflation adjusted price would be constant over time.

We know this not to be true.

For those looking for shelter from unanticipated inflation, inflation linked bonds provide sufficiently reliable protection in our opinion.

Is gold still the place to hide?

For the moment, we continue to lean our commodity exposure towards energy over precious metals where possible.

As described in our article Peering into 2019: What does the future hold for investors? [please can this text be hyperlinked to the article referenced] in this month’s In Focus, none of the indicators that have historically heralded darker economic skies are currently flashing amber.

Even if they were, we’re not sure that gold would be the place to hide.

Gold has some diversification, but little return appeal to us in portfolios.

Therefore, we continue to urge clients to keep holdings sized in the low single digits as a percentage of their overall investable assets.