Foreign exchange: What goes down...

Thorny and damaging negotiations over the proposed Italian budget allied with diverging economies and interest rate expectations have contributed to a pronounced decline in euro/dollar this year.

We explore the extent to which all of this divergence and disharmony is priced in by markets and the potential for a rebound in the coming six months.

The eurozone recovery looks to be a couple of years behind that enjoyed by the US. Unemployment in Europe has fallen sharply from much higher levels.

And more broadly the eurozone is now using a much greater percentage of its previously idle capacity.

A more vigorous inflation backdrop may not be as far off as some, focused more on recent history, continue to argue.

Nonetheless, 2018 has seen economic data disappoint a little. The surge seen in the second half of 2016 and much of 2017 is long gone.

There has been an entirely different story in the US of course, fuelled by the recent fiscal stimulus, an already healthy trend has been supercharged this year.

Investors tend to pay attention to PMI surveys as they are often deemed early indicators of economic developments.

These surveys are a diffusion index, meaning they measure how broad based acceleration or deceleration in the data is, thus it is more of an indication of strength instead of magnitude. 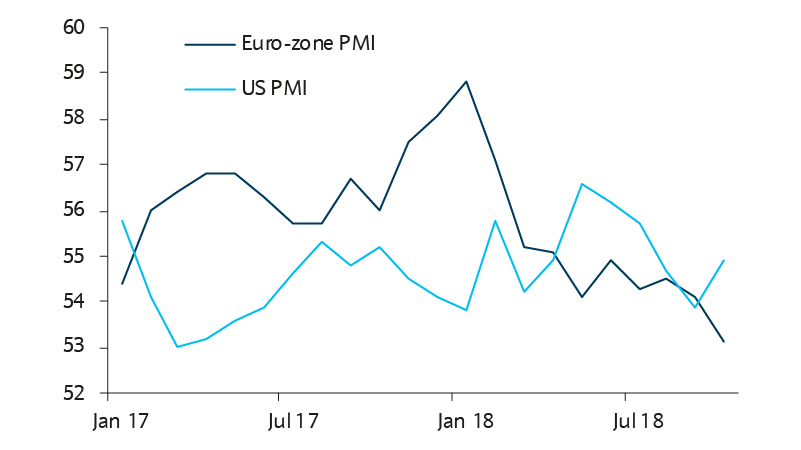 Over 2018, figure 1 illustrates the point that eurozone economic momentum has been moving in a different direction to that seen in the US.

There has also been a divergence in the relative trajectories of monetary policy.

The Federal Reserve has been raising interest rates, while the European Central Bank (ECB) is only just getting round to ending its asset purchase program. Deposit rates in the euro area still sit in negative territory and are only expected to gradually move out of this basement towards the end of next year (figure 2)1. 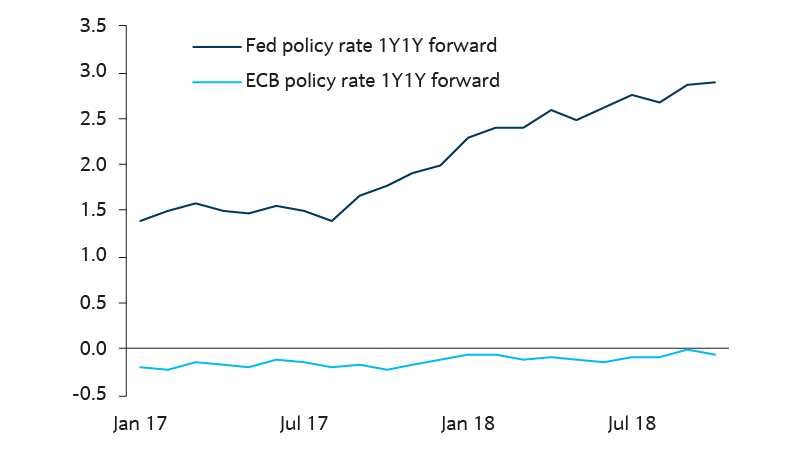 A swoon, not a trend

Do those divergences, topped with the evolving Italian budget drama explain where the current euro/dollar exchange rate currently sits (figure 3)? 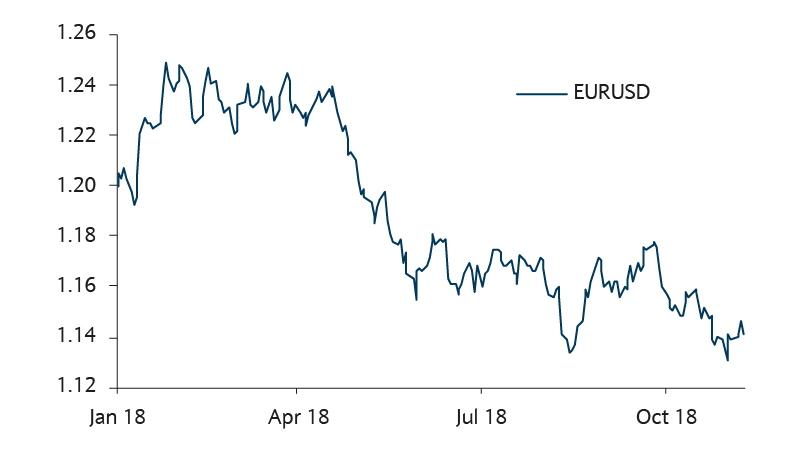 Are there scenarios where this divergence will be challenged?

The ECB expects the softness in eurozone activity to be temporary, largely a function of car manufacturer teething troubles associated with the adoption of new emissions tests, as do we.

When and if eurozone data improves, will investors change their view on the path of interest rates again?

The Italian budget negotiations will have come to a conclusion over the next month.

On the other side, as some of those aforementioned fiscal boosts fade from the US, could we see the Federal Reserve decide to pause or at the very least dial down expectations?

It feels that a lot of the recent divergence between the US and the eurozone have been priced into the exchange rate, with the euro/dollar about 8% lower from levels seen earlier this year.

In financial markets, sizeable divergences tend to revert. Is this one of those moments?