It’s time to take profit on an underweight position in government bonds. In most geographies benchmark interest rates have been drifting higher over 2018.

This drift has been most pronounced in the US, where 10-year interest rates started the year at 2.4% and are now just over 3.2%, resulting in a loss for Treasury bond investors of just over 4%.

Real interest rates and the dollar

With the US economy powering ahead and inflation still at bay, it has been mainly the ‘real’ interest rate that has increased over this time. That is, the interest rate not directly affected by inflation expectations, derived from inflation-protected Treasuries, as figure 1 illustrates. 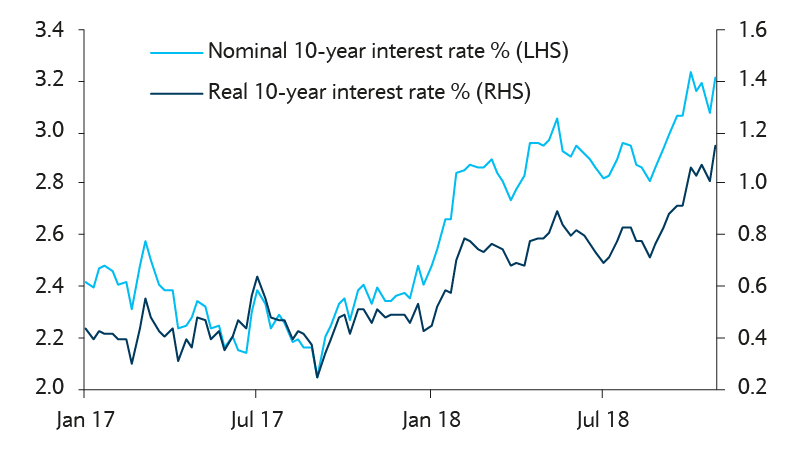 The recent increases in real interest rates are partially a result of comments made by the Federal Reserve Chair, Jay Powell that the current policy rate is far from ‘neutral’.

The path of interest rates implied within the yield curve, both near and distant, has been reappraised as a result.

This move has left Treasuries closer to a fair value in our view.

Simply comparing the market pricing for where the policy rate is expected to settle in 10-year’s time with an academic estimation of a nominal equilibrium rate, we see this gap has now been closed (figure 2). 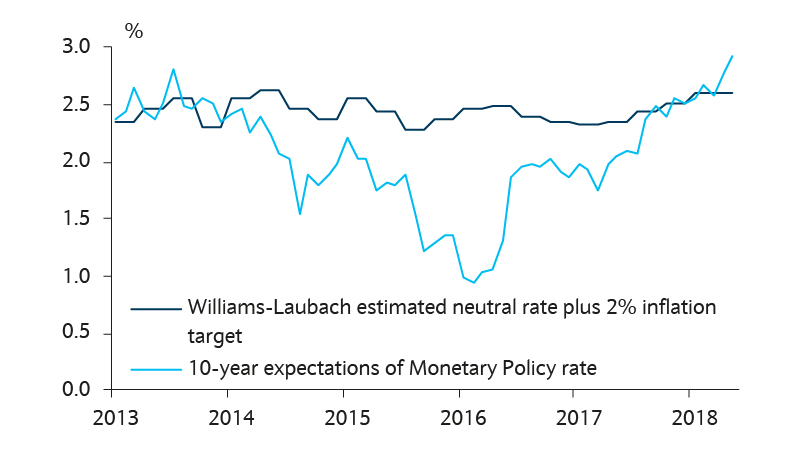 Looking through the lens of monetary policy, as central bankers do, it is the real interest rate that really matters in terms of impact on the economy.

During the most recent financial crisis, the Federal Reserve even applied a purchase program (‘Operation Twist’) to flatten the yield curve, so influencing longer-term yields.

However, the reverse is also true of course.

When real interest rates rise, as they now have in the US, it should tighten financial conditions.

The substantial appreciation of the US dollar seen over this year should actually have a similar, additive effect on conditions in the US economy.

However, higher interest rates allied to a stronger exchange rate do not have to send the economy into reverse, but the pace of change in conditions that these combined moves can inflict on the economy can have important implications for central bankers.

For interest rates across the curve to move substantially higher from this point, we would likely need to see inflation expectations respond to the risk of an inflation overshoot.

We are certainly seeing inflationary pressures gathering momentum a little in the US economy, but not yet to the degree that would see a continuing underweight in the government bond market being rewarded.

In our tactical asset allocation, deviations from the SAA holdings reflect our conviction that a market will head in a certain direction.

We have long held the view that interest rates in the US are likely to rise over time, faster than markets had been anticipating.

Given the recent rise in yields, we feel a fair bit of this story has now been priced-in and have been taking profits by closing underweight positions in developed markets government bonds in our tactical portfolios.