It was a tough October for equities markets with global stocks experiencing their worst monthly returns since 2012.

This plunge in equity prices, so far, has not been accompanied by a similar decline in corporate earnings, either trailing or forecasts.

Equity valuation multiples have fallen sharply across the world, as a result.

With Q3 earnings reporting season in the US and Europe, excluding the UK, almost behind us, we take stock on some of the key trends in corporate earnings.

For US equities, the impressive pace of earnings growth in corporate America continues. This helps to justify the region’s impressive outperformance of all the major competition so far this year.

Indeed, Q3 earnings per share growth came in exceptionally strong at north of 20% year-on-year, the fastest pace since 2011, and far outpacing earnings growth rates seen in the rest of the world over a comparable period.

This was largely due to corporate tax cuts from last December, but healthy economic fundamentals have no doubt played an important role in this earnings rally as well.

Robust revenue growth pay testament to the latter, with overall sales up by a solid 8% year-on-year.

The question here is what comes next?

Boosted by fiscal stimulus, US economic growth currently looks as good as it gets, with a record eight consecutive quarters of accelerating year-on-year growth, and key macro indicators like the Institute for Supply Management (ISM) manufacturing index and consumer confidence near their cycle highs.

We expect the US fiscal stimulus to fade over the course of next year, reducing the tailwind that the US has enjoyed relative to other regions.

The earnings picture looks very similar - the boost from tax cuts will fall out of the comparisons next year and a tightening labour market with rising wages could put greater pressure on labour costs than in other regions. 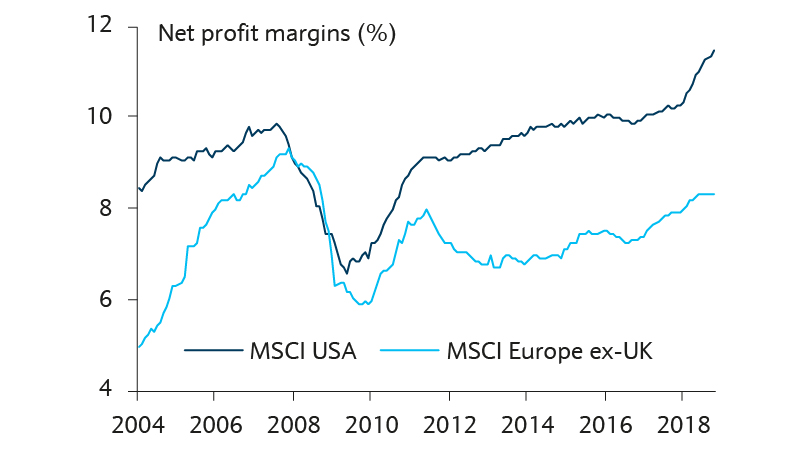 As a result, we think the overall macro backdrop looks set to be less favourable for both profit margins and sales growth.

These factors make US equities a less attractive risk-reward opportunity, and we are positioned in other regions such as emerging market and Europe, excluding the UK, equities to reflect our positive stance on equities.

In many ways Europe, excluding the UK, looks to be the mirror image.

With earnings growing at a measly 5% year-on-year over the quarter, the performance of Continental European firms seems to be operating on a different, more dismal planet.

That being said, there are some positives in the region.

For one, earnings growth hasn’t been as bad as recent price movements may suggest.

We continue to see a decent recovery in measures of corporate profitability such as return-on-equity (ROE) and net profit margins as we’ve long hoped for.

Much of the weakness seems to lie in revenue growth – with sales only growing by about 2% year-on-year this quarter. However, there is significant variation at the sector level in these revenue trends.

In terms of outlook, a large part of the recent soggy patch in the Continental European economy can be chalked up to the transitory effect of a messy adoption of new auto emissions tests.

This will fade as we look into the end of this year and beginning of next.

Nonetheless, our overweight position in continental European equities does not hang on a sharp acceleration in the region’s economy and therefore its corporate sectors revenue and earnings growth.

It is a more a function of what we see as excessive investor gloom with regards to a region, where the continuing cacophony of political and other noise still helps obscure a better than feared corporate and economic backdrop.