“Reports of my death have been greatly exaggerated” (Mark Twain, apocryphal)

Historically December has been a month for investors to relax and watch contentedly as markets get into the festive spirit (figure 1).

The Christmas spirit was notably absent this year, as equity and indeed wider capital markets rioted to the last. 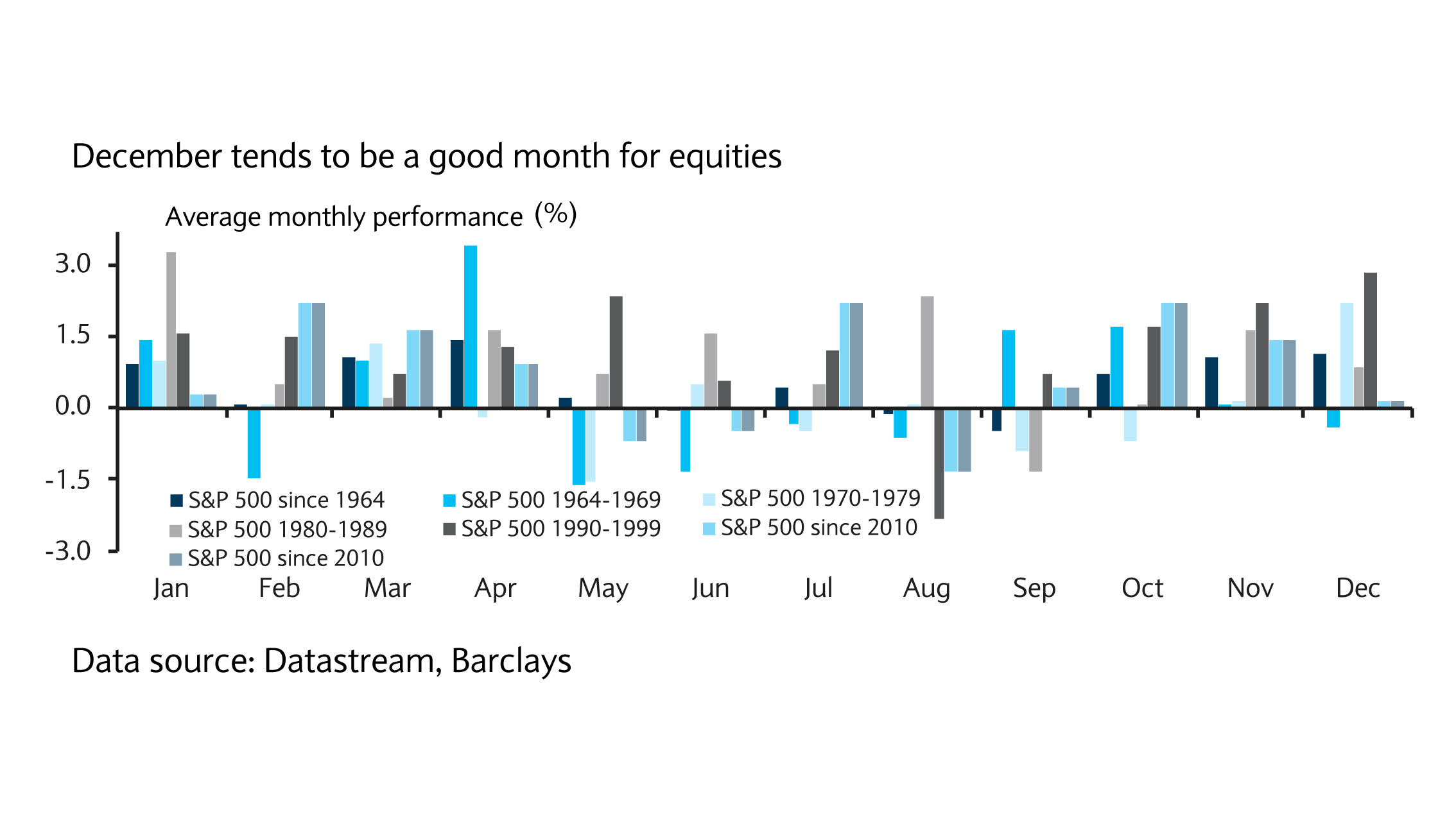 US stocks endured their worst December since the great depression.

Fixed income investors reversed their expectations of further steady interest rate rises in the US, with cuts now expected on a 12-month view (figure 2). 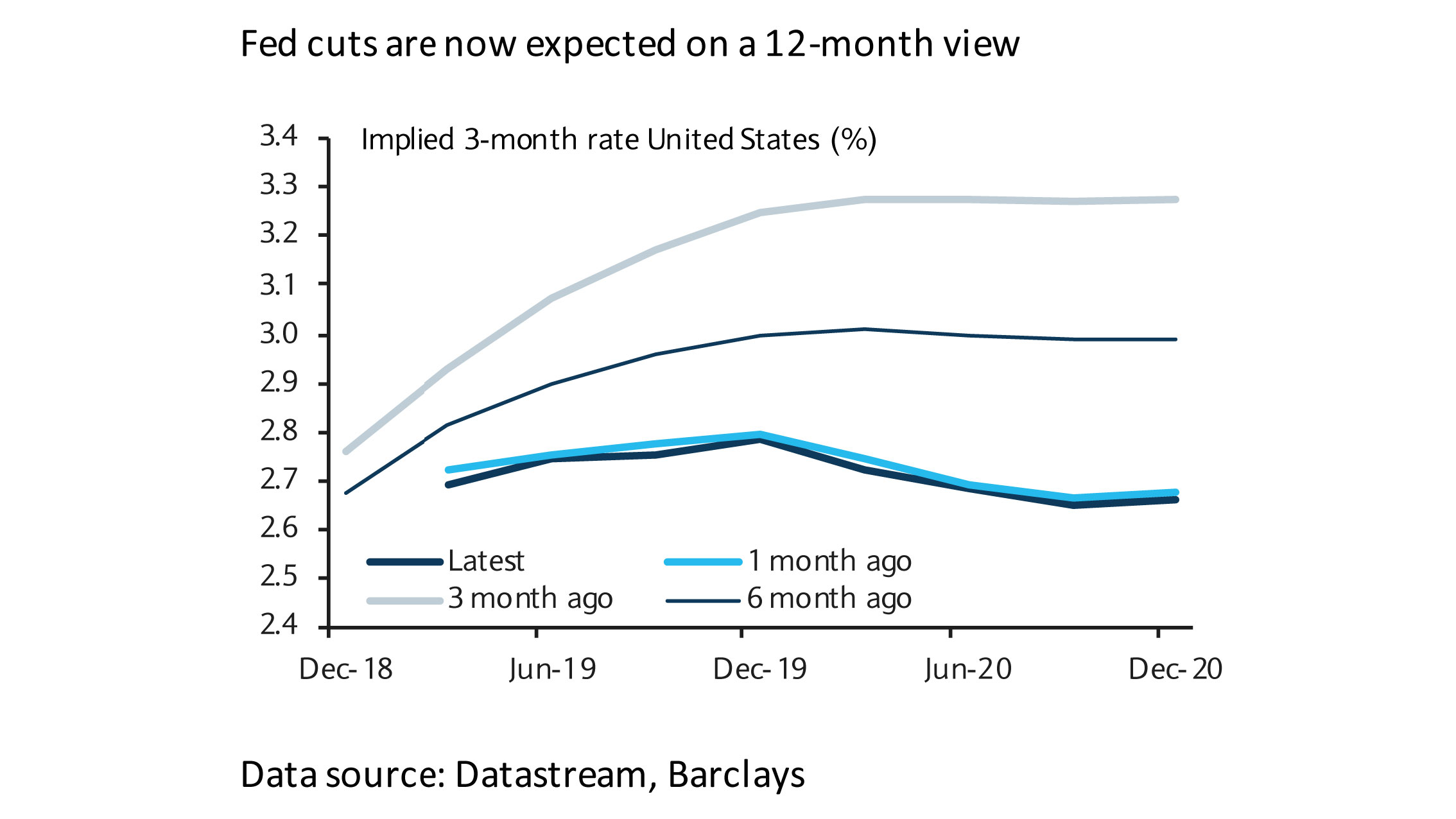 Somewhat perversely, January has seen a calmer mood return, with some of those aforementioned moves being at least partially reversed.

However, the questions remain – what spooked the world’s investors so much in December and what does it mean for our portfolio positioning as we look to the year ahead?

It is perhaps understandable that investors focusing on the chronological age of this economic cycle are getting increasingly twitchy.

Measured this way alone, this expansion is positively geriatric.

Alongside that, the horrors of the last, unusually severe, recession are still fresh in many investors’ minds. If such harrowing losses can be avoided, who really minds if they are a little early calling the next recession?

This is not a new story in this economic cycle.

The ever jagged teeth of the business cycle (figure 3), in some part a function of benign role of inventories, has been a source of added unease in this expansion. 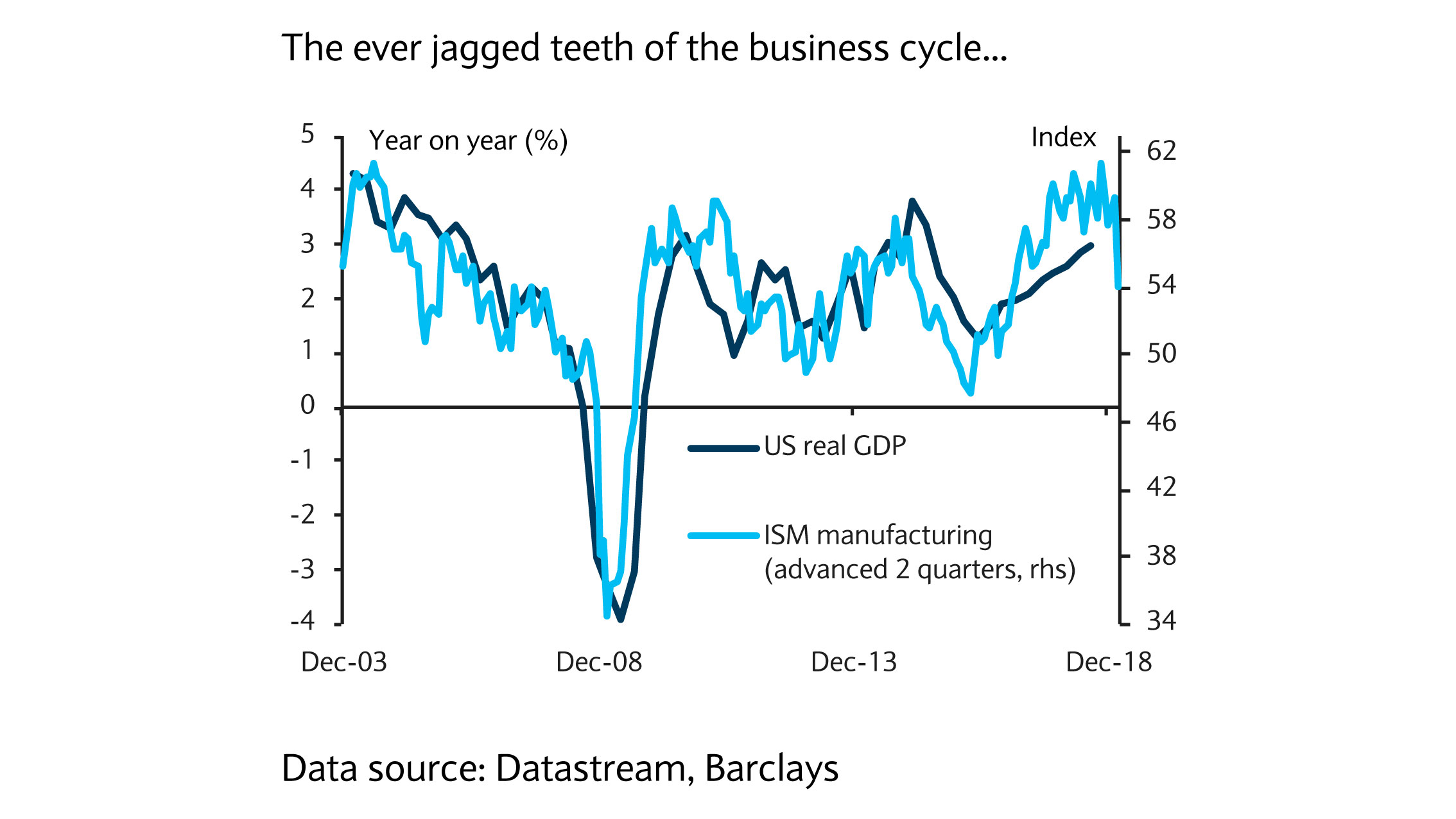 Each time stock rooms have been emptied, many have extrapolated the resulting swoon in demand into an imminent recession.

Such is the shadow cast by the traumatic and mostly unanticipated financial crisis over a decade ago.  So far, such extrapolation has proved costly in forgone opportunities.

As we look to 2019, we of course cannot rule out a recession.

As we regularly point out, the causes of many past global recessions were not predictable ahead of time – oil shocks, wars and more generic swings in ‘animal spirits’ have been an unavoidable part of investing life.

Many argue that part of the compensation we receive from financial assets accounts for these increasingly infrequent blights.

Nonetheless, humility, and its investing equivalent, diversification are always appropriate as we regularly argue. The future will remain shrouded in mystery no matter how hard we squint.

For those looking for a more accessible example, think of your ability to know in advance the results of every game in the Premiership (football) for the weekend just gone.

There are generally always a few, sometimes more, surprises.

We may have a better chance however of guessing who might win the premiership title, based on the quality and size of the squad, spending power, recent track record and a range of other metrics.

So it loosely goes with investing.

Here, the longer term tends to be more readily tethered to humankind’s relatively reliable ability to innovate. In the short run, the larger role played by confidence in the world economy will regularly make fools of us all.

In such a context, the strategic part of our investment portfolios, the part that delivers the majority of your returns over time, will continue to play to that long-term theme.

For medium risk portfolios, a slant towards stock markets and company ownership gives you exposure to the humankind’s aforementioned innate restlessness.

On the other hand, the part of the portfolio that is designed to harvest any short-term opportunities does not so much rest on an ability to see the future better than anyone else.

More it is about retaining a focus on analysing incoming data on the world economy as dispassionately and objectively as possible.

When and if there are signs that others in the market are perhaps struggling to do the same, opportunities can arise.

The dark decent into recession?

Even after the bounce back in sentiment that we have seen so far this year, we suspect that investors in aggregate are a little too cautious on the prospects for global growth and inflation in the quarters ahead.

We are not expecting a sharp bounce back in economic activity from the world this year.

The US fiscal surge has ebbed as expected and the ongoing government shutdown is further taxing quarterly growth.

Meanwhile, the Chinese economy should find a lower trend, helpfully a little closer to its potential growth rate.

The clouds do continue to darken over the UK a little, but this is of much less importance to the world’s (even the UK’s) capital markets as we regularly point out.

Overall, our indicators are still not yet telling us that a recession is on the horizon (figure 4). 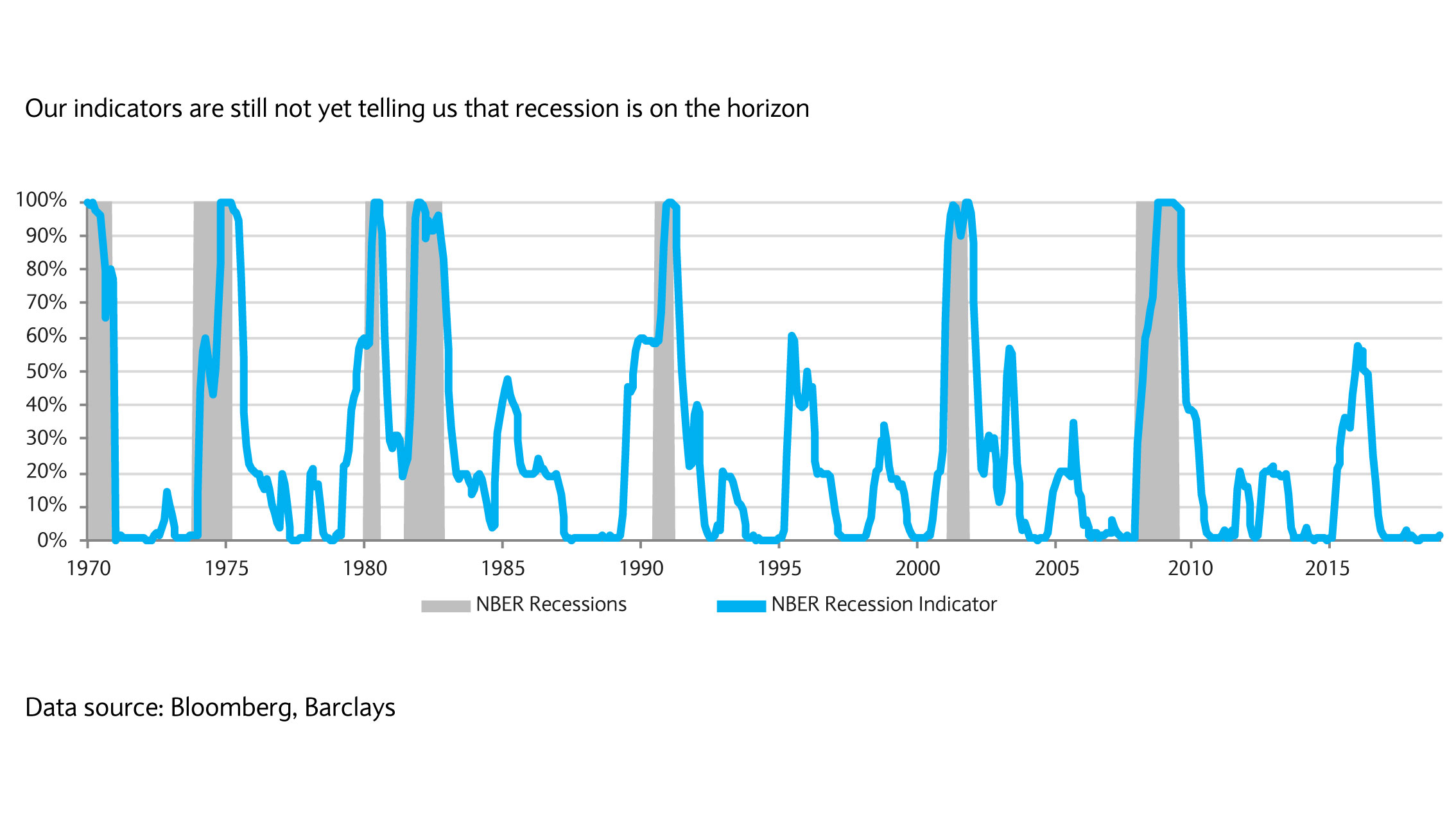 As a result, our tactical portfolio remains slanted in the opposite direction to this still cautious consensus.

We own a little more equity than our benchmark and less high quality bonds, as we explored in last month’s In Focus in more detail.

Overall, our tactical portfolio is significantly less risky than say at the beginning of 2016, which incidentally was the last time the downslope of an inventory cycle became mixed up with the dark descent into recession.

Slumping sentiment had forced a more profound dislocation from fundamental reality back then in our opinion.

The opportunity now is more moderate and the cycle is a little older this time around, as our more muted positioning implies.