The actions come after five rounds of incremental sanctions in 2017 to 2019 by President Trump, nearly four years after President Obama first ordered sanctions on regime officials.

Whilst Venezuela will be allowed to sell oil to US refiners until April 28, payments will have to go to a blocked account so that proceeds cannot be remitted to Venezuela.

The sanctions also prohibit the sale of diluents to PDVSA, usually blended with the heavier crude that Venezuela exports.

The US exports around 120 thousand barrels per day (kb/d) of lighter oils to Venezuela for this purpose (figure 1). 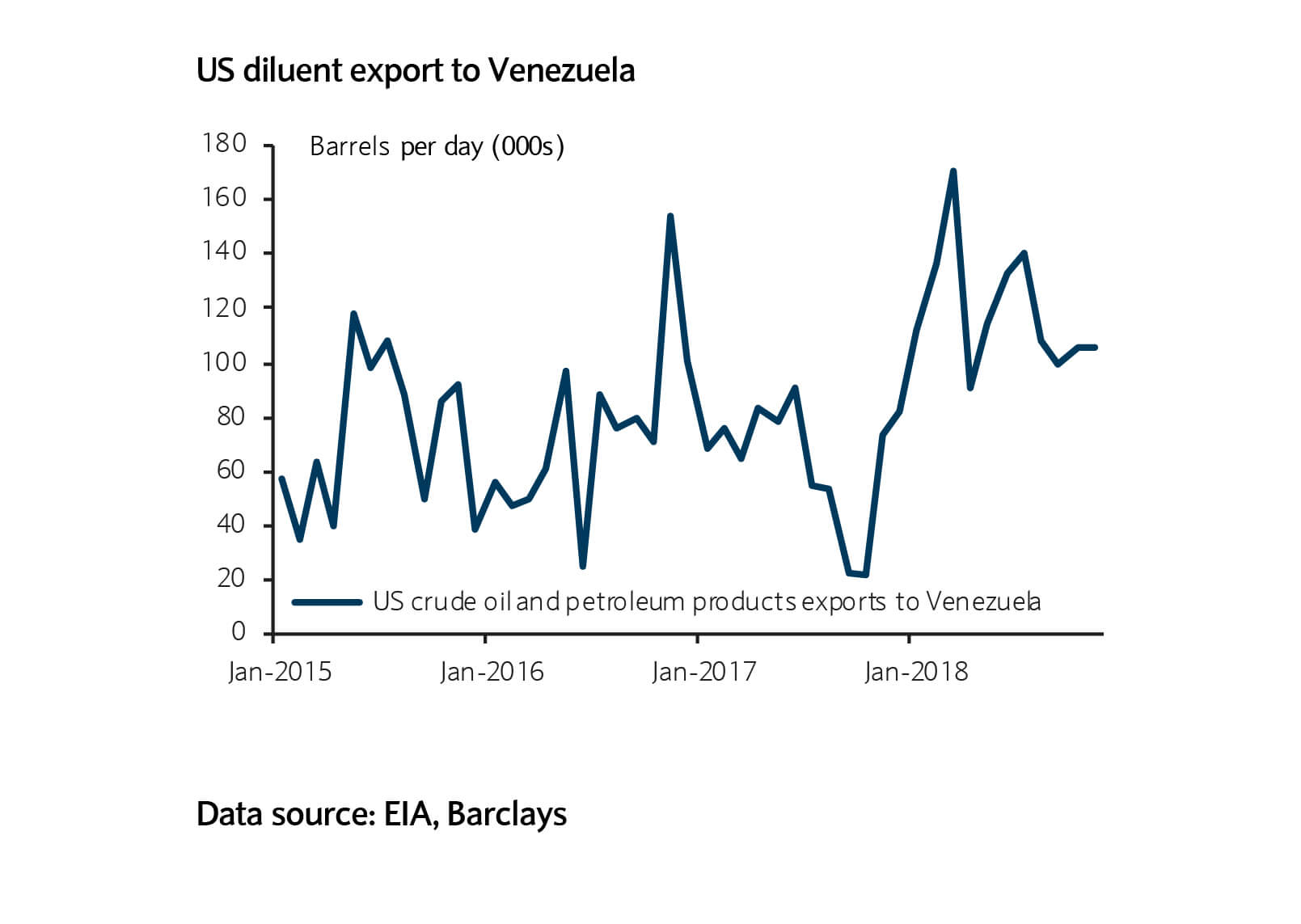 On February 1, the US Treasury issued further details, implying that the sanctions on Venezuela, like those targeting Iran, will bar companies from using the US financial system to do business with PDVSA.

Thus the reach of the sanctions extends well beyond the US.

Over the first eleven months of 2018, US imports of Venezuelan crude averaged 506 kb/d according to US Energy Information Administration data (figure 2).

This supply is essential for the US gulf coast refiners, who blend it with domestic oil to achieve an optimum blend.

These refiners will have to look for alternatives to replace supplies. In the long term, turning increasingly to Canadian oil will be the obvious choice.

However, a lack of takeaway capacity implies limited supply from Canada is likely to stay for a while.

Regarding turning to the Middle East for heavy crude oil supply, the current deal within the Organization of the Petroleum Exporting Countries and its allies (OPEC+) implies that members are likely to cut output of heavier crude oil first, given the discount at which it trades to lighter grades.

A diversion of Venezuelan oil exports from the US market faces difficulties to implementation.

Will China come to the rescue?

China, probably the first alternative, does not have enough refining to process much more medium to heavy oil such as what Venezuela produces.

In addition, much of the exports for China go towards debt repayment, and so for PDVSA this does little to help generate cash.

Therefore, a more viable alternative would probably be India.

Media quoted a senior executive at an Indian oil company as saying: “We pay in Euros for Venezuelan crude, so we are hoping that we can buy more”.

Infrastructure in Venezuela has significantly deteriorated, ports have limited space for ships of the size used for exports to Asia and the control of PDVSA’s facilities in the Caribbean that are used as logistical hubs for these exports is at risk of being interrupted.

The recognition of an alternative government in Venezuela could have further implications.

The control over Citgo, PDVSA’s refining arm in the US, could be at stake.

Citgo still processes 200-250 kb/d of the crude that Venezuela sends to the US and, more importantly, has been playing a key role in PDVSA’s procurement process.

Given the credit, legal and reputational risks of working with PDVSA, Citgo has had to get involved in the acquisition of diluents, parts and equipment for the Venezuelan oil industry.

Therefore, the loss of control over this subsidiary would complicate PDVSA’s operations even more.

Venezuelan oil output has been in decline for several years now, with a lack of investment in oil fields seeing exports fall to around 1.2 million barrels per day currently.

Given that US oil service companies will have to wind down dealings with PDVSA, this suggests the potential for steeper supply losses in Venezuelan crude oil output moving forward.

This should be supportive for oil prices.