After remaining stable for one and half years at about 2%, the year on year increase in house prices has sharply deteriorated in the last months, according to the Nationwide average house price index.

The latest reading from January is a meagre 0.1% increase, which is the lowest rate since February 2013 (figure 1). 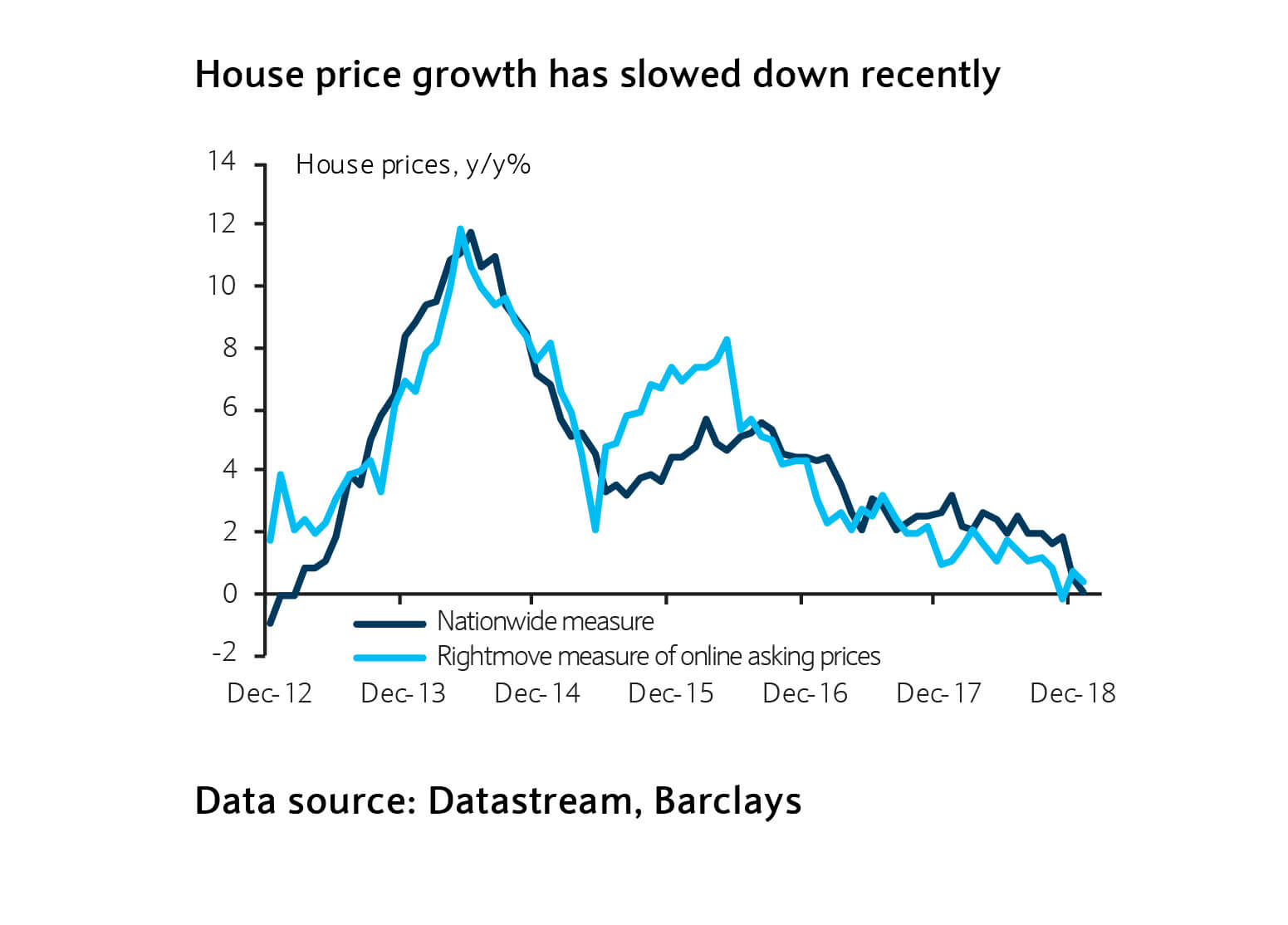 The slowdown in house price increases occurred despite favourable supply and affordability conditions.

Has Brexit created a value opportunity?

Addressing inadequate supply is a difficult challenge for policymakers, which has likely been exacerbated while Brexit dominates the political agenda, as still some 50,000 fewer new-build houses come to the market each year now than in the 1980s.

In terms of affordability, the cost of servicing a new mortgage as a chunk of take-home pay is what matters.

Growth in real wages has been improving recently, thanks to nominal wages rising and inflation falling.

Meanwhile, the Bank of England’s decision to hold off raising interest rates, in part due to the uncertainty of Brexit, has helped keep a lid on mortgage rates.

For example, the rate for a five-year fixed-rate 75% loan-to-value mortgage has remained stable at 2% over the last year and a half.

So by these measures, it would appear home affordability has somewhat improved recently.

This leads us to conclude that the deterioration in house price growth is largely sentiment driven.

This is consistent with the recent decline of consumer confidence (figure 2) and the Building Societies Association’s (BSA) quarterly property tracker, which indicates that Brexit uncertainty is the primary cause for the sharp fall in housing market confidence.

The BSA’s quarterly property tracker survey shows that a net balance of -14 households think now is a good time to buy a house, down from -4 in September.

The balance has been negative for seven consecutive quarters, having been consistently positive in the previous eight years.

All the while the risk of a no-deal Brexit looms, prospective house-buyers may be tempted to wait for the uncertainty to subside.

This could lead to some sellers lowering asking prices in an effort to attract buyers, which means year-over-year declines in house prices shouldn’t be ruled out for the coming months.

However, in the medium term, the chances are high that real house prices will revert to their long trend of being flat over time, or increasing at most 1% a year.

After accounting for fees, tax and the benefit of living in the house without paying rent, this makes the benefits of investing in the housing market roughly comparable to the expected return of a medium risk balanced financial portfolio.

The advantage of a balanced financial portfolio is that it offers diversification.

The only free lunch in finance

Nobel Prize–winning economist Harry Markowitz, the father of Modern Portfolio Theory, was the first to demonstrate that a diversified portfolio can deliver improved performance and lessened risk relative to individual assets.

This notion that you’d get something for nothing is nearly unheard of in economics.

And it’s why Markowitz famously called diversification “the only free lunch in finance.”

The key concept behind the free lunch is correlation, or rather, a lack of it.

Typically, the performances of individual assets aren’t perfectly correlated. If asset values do not move up and down in perfect harmony, then a diversified portfolio will have less risk than the weighted average risk of its parts.

Further, you are not putting all your eggs in one basket.

The argument for diversification

If the market in one country or region stagnates, the difference can be made up in other sectors that are booming.

This makes a globally diversified portfolio more immune against problems in single economies like the UK.

Diversification across asset classes similarly cushions, for example, the impact of downturns in equity markets.

The more extensively diversified an investment portfolio, the greater the likelihood it mirrors the performance of the overall market.

This is in contrast to an individual house, which gives you far more concentrated exposure and performance can differ significantly depending on location and other characteristics.