Higher interest rates are far from universally popular. All expenditure has to be viewed through the prism of the interest rate at which it was financed.

As interest rates rise, everything from the decision to splash out on some ‘Paw Patrol’ plastic to placate the little savages to state infrastructure projects needs to be re-evaluated.

Higher interest rates also change the complexion of past projects.

Whatever your views on higher interest rates, this was a quarter when they did us all a few favours.

When the tide goes out...

It is precisely because the act of raising interest rates is more often than not going to be unpopular, that central banking has been wrenched from the clammy paws of the politicians in most of the world’s major economies.

Independent, unpopular, central banking is rightly cherished by investors, as the recent flare up in Turkey proved.

President Erdogan’s promise to step up his role in the economy after elections at the end of June was not well received by markets. The lira plunged, borrowing costs soared (Figure 1), and the country gazed briefly into the economic abyss. 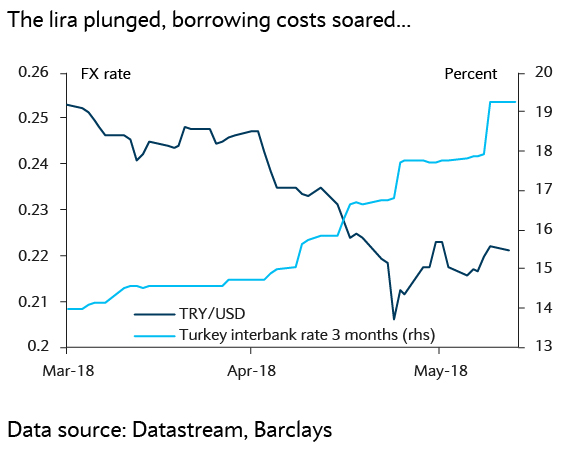 In response, the central bank, against earlier ‘advice’ from the President, has raised interest rates by a cumulative 5%.

Disaster seems to have been averted for now, with some trust restored in the inflation-fighting credibility of the Turkish central bank.

Others around the world have also been using the ultra-low interest rates of the post-crisis era to live beyond their means, or swim without their trunks, as the saying goes. Such swimmers are always easier to spot when the tide goes out, or when interest rates rise, as they are in the US at the moment.

However, using a scorecard that focuses on factors ranging from external funding needs and debt exposures to its ability to attract foreign investment flows, we find that the sinners seem relatively isolated amongst the emerging market economies this time around. Argentina, Turkey and South Africa stand out.

Reassuringly, emerging Asia, where we remain most positive within emerging market equities, appears to be most resilient to rising US interest rates on this measure.

Italy was another example of the restraining influence of the bond market in this quarter. Some wild statements on spending plans, debt forgiveness and even euro membership from the incoming Italian government saw borrowing costs in the economy understandably spike higher (Figure 2).

Try going to your mortgage advisor and suggest that you are going to work less, spend more, and may want to pay your mortgage back in a ‘new’ currency, and see what interest rate you are offered on the loan.

However, a few days of rising panic in markets served to blunt some of the new coalition’s proposals. A new, less incendiary finance minister was proposed and reassurances were given on EU membership among other things. Markets calmed again.

This disciplinary streak in markets may also come in handy in the UK before too long.

These examples of living beyond means, or trying to, will not be limited to specific countries. As always, there will be lenders and borrowers all over the world who have misjudged or misled, or both.

As the cost of borrowing in the US continues to rise across all maturities, more of these misallocations will no doubt be revealed. However, our bet remains that these incidences of traditional late cycle hubris will not have taken on the systemic importance that some of the cycle-killers of the past managed.

Animal spirits and wider risk appetite have been constrained for much of this economic cycle, in large part a function of the long shadow cast by the Great Financial Crisis and indeed the still-smouldering Euro Crisis. That shadow has started to fade in the last couple of years (Figure 3). 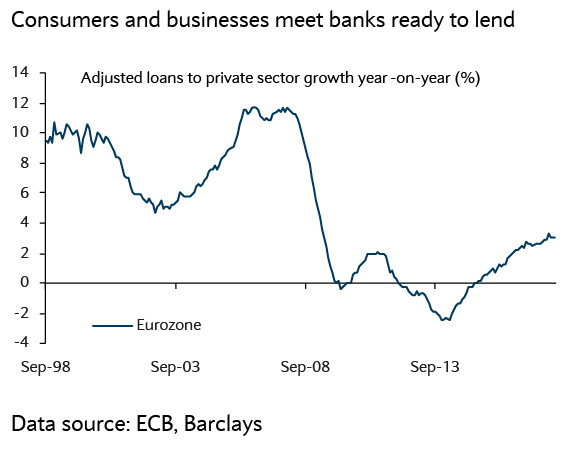 Consumers and businesses ready to borrow are finally meeting banks ready and more able to lend. Higher interest rates will be important in enforcing some discipline on these actors.

Rising interest rates complicate the job of investing in capital markets of course, particularly for those looking for less risk. Large chunks of the high-quality government and corporate bond market will continue to offer more diversification than real return appeal for a while yet (Figure 4).

We continue to argue that carefully weighed credit risk remains an important part of portfolios in this context. The world economy in aggregate still looks capable of providing plenty of juice to service some of these riskier credits. Nonetheless, we should be prepared for more unsightly revelations in the second half of the year.