The ever-smouldering euro crisis briefly burst back into flames this month. After months of wrangling, a populist coalition, throwing together the political extremities, managed to form a government.

Amidst these worries, we examine whether our tactical overweight to European equities remains warranted.

A further deterioration here can affect the equity market through two channels. The first, and most immediate, is price multiple de-rating as investors bake in a slightly higher risk that Italy returns to the lira and all that would follow.

The second channel is through economic contagion. Waning private sector confidence from yet more political uncertainty can further slow an already moderating growth profile as businesses and consumers hold up on spending.

In the worst-case scenario, an Italian version of the 2015 Syriza-EU showdown would hit Italy’s already troubled banking sector, with reverberations on the wider Eurozone banking sector and economy.

The key question is whether the probability of economic contagion is high enough to justify removing our overweight to Europe. If we cut through the headline noise, is there a high enough likelihood that the new Italian government brings forth another full-blown euro crisis? For now, our answer is no.

The latest high-frequency business surveys tell us that confidence in the real economy hasn’t materially deteriorated in May. This may change as we move further along, but from past experience, we know that spikes in political uncertainty aren’t necessarily followed by cutbacks in spending1.

There are also reassuringly considerable constraints, both external and internal, that limit the government’s ability to fully implement its proposals, let alone initiate a damaging showdown with the EU2.

Granted, political actors can act in irrational ways, and accidents do happen, but it’s unwise to base our entire tactical positioning on the small probability of a tail risk event.

Once we’re clear on the politics, we then re-examine whether the fundamental case for European equities remains intact.

We still believe it does.

While the market increasingly debates the late-cycle nature of the US/global economy, Europe's own cycle is less mature from an economic and earnings perspective (Figure 1). 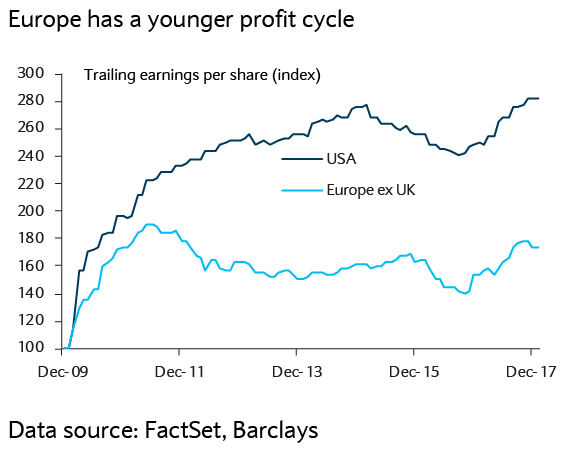 As long as global nominal growth continues to hold up, then Europe's younger profit cycle remains attractive to us.

We’ve mentioned how valuations matter less when it comes to making tactical plays. With growth momentum slowing and headline risks ranging from trade wars to Italian politics weighing on investor sentiment, we don't think the backdrop is conducive for higher European equity valuations over the short term anyway.

Still, the region’s prospects aren’t harmed by its relative undervaluation, with the region still looking cheap versus its global peers in a historical context (Figure 2). 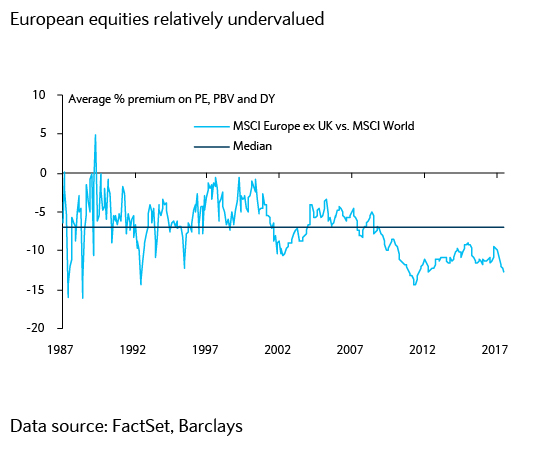 At the very least, low valuations may help serve as a cushion from further de-rating.

We still think that European equities have an attractive relative upside over a medium-term horizon.

Nevertheless, we think this is a region with a relatively high reward/high risk profile. Therefore, a tactical play on European equities should be sized and diversified appropriately, as we are doing within our own tactical asset allocation.

Italian spreads widened to their highest levels since 2013 in May, as markets fretted over Italy’s fiscal path under its new populist government. The government’s newly proposed policies call for all sorts of goodies such as a universal basic income, tax reductions, and a decrease in the mandatory retirement age.

If fully implemented, they will likely raise Italy’s already worrisome debt/GDP ratio, threatening the country’s debt sustainability. Unsurprisingly, markets are increasingly worried about a return to the dark days of the Euro Crisis.

It’s tempting to oversimplify things and overemphasise the parallels between 2012 and the current situation. However, there are two important differences here.

Firstly, the spillover to other peripheral bond yields has so far been muted – this is primarily an Italy-focussed, rather than periphery-wide issue. 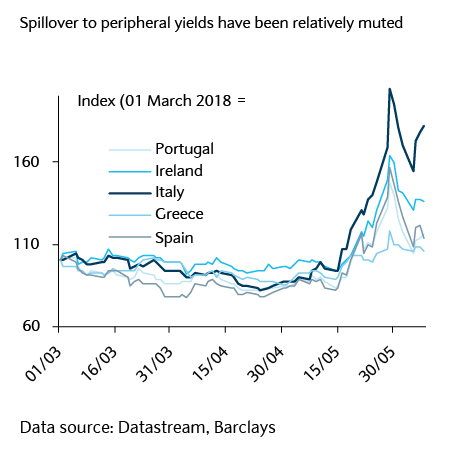 Second, the level of spread widening in Italian debt remains well below the 2012 Euro Crisis. To us, these nuances reflect a few key differentiating factors relative to 2012 – factors that lead us to believe that a 2012-style meltdown remains unlikely for now.

The first differentiating factor is the overall macro backdrop for the Eurozone. Despite the recent moderation in activity indicators, Eurozone growth remains firmly positive. The peripheral nations themselves (including Italy) have also made great strides in reducing their macroeconomic imbalances.

Today, most of them have significantly reduced their budget deficits, while enjoying current account surpluses.

This stands in stark contrast to 2011-2012, when sizable ‘twin deficits’ left them vulnerable to the whims of foreign investors.

In this context, the muted spillovers we are seeing so far seem understandable. 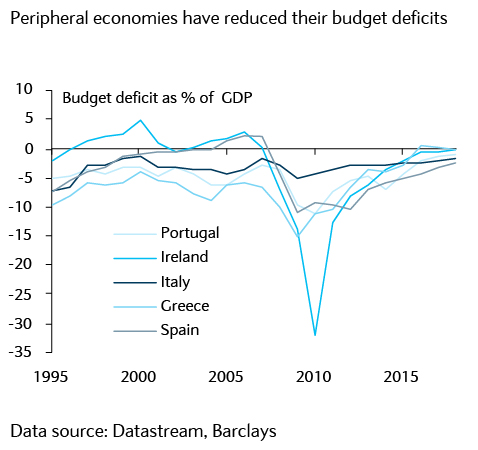 The second differentiating factor today is the European Central Bank (ECB). Back in 2012, the Euro Crisis was formed of three interlocking crises: a banking crisis, a sovereign debt crisis, and a growth crisis.

Surging peripheral yields threatened the solvency of European banks which had outsized exposure to peripheral debt. This impaired the credit lending channel, thus further weighing on economies already burdened by austerity and the after-effects of the Great Recession.

The resulting slowdown in growth further threatened the fiscal sustainability of the peripheral economies, which then placed further upward pressure on yields, and so forth…

This negative feedback loop was only broken when the ECB committed itself as a fiscal backstop, with the unveiling of a facility known as outright monetary transactions (OMT). OMT allows the ECB to purchase Eurozone sovereign debt in the secondary markets, which implicitly places a theoretical cap on sovereign yields.

While the use of the OMT comes with strict conditionality, it should nevertheless put a ceiling on contagion risk.

Finally, European banks are in much better shape today relative to 2012. Granted, pockets of idiosyncratic risk remain (Italy in particular), and profitability remains stubbornly below pre-crisis levels. However, European banks have materially improved their ability to resist negative shocks.

Liquidity provision from the ECB in the form of Long Term Targeted Refinancing Operations (TLTROs) has bolstered balance sheet liquidity, bad assets have been ring-fenced, capital ratios have improved, and profitability is starting to recover.

Together, these factors should limit the risk that the current political crisis in Italy morphs into a full-blown Eurozone-wide financial crisis. Although political uncertainty in Italy will likely linger, the bar for wider contagion risk is far higher today, in our view.3

If you have any questions related to this, please speak to your Private Banker.