Stock markets remain in defibrillator mode – a sideways trend with occasional pulses of volatility. Global stocks in aggregate have returned nothing for six months.

Within this, a measly 1% has been brought home by investors in developed equities, while those in emerging markets have lost 13% (Figure 1). 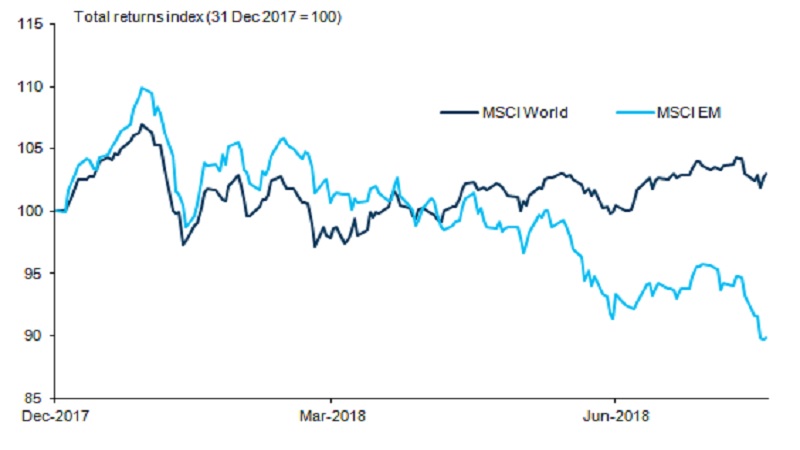 In the background, expected earnings have continued to rise. Year to date, 12 month forward earnings are 13% higher in the developed world and 2% in the emerging.

So, while investors were happy to pay 16 dollars for every dollar of forecast earnings at the end of 2017, the going rate is now less than 15 dollars. The same story is evident in credit spreads. What gives?

Looking beyond the headlines

There are several factors for investors to think about here. First and foremost, we can plausibly argue that the risks of a damaging trade war have risen in the last six months.

While this higher probability is perhaps not fully reflected in actual earnings forecasts, particularly not with incoming data so perky, investors would be right to handicap prices a little to compensate.

More recently Turkey’s plight cannot have helped risk appetite and neither can the flattening US government yield curve - with an inversion seen as one of the more reliable horseman of the often predicted economic apocalypse.

Growth is also a little less synchronised than we saw in 2017. The US economy is surely humming again, juiced by fiscal steroids, but Europe has been taking a breather after its long awaited acceleration from 2016. Meanwhile the Chinese economy has been sagging under the weight of a necessary deleveraging. 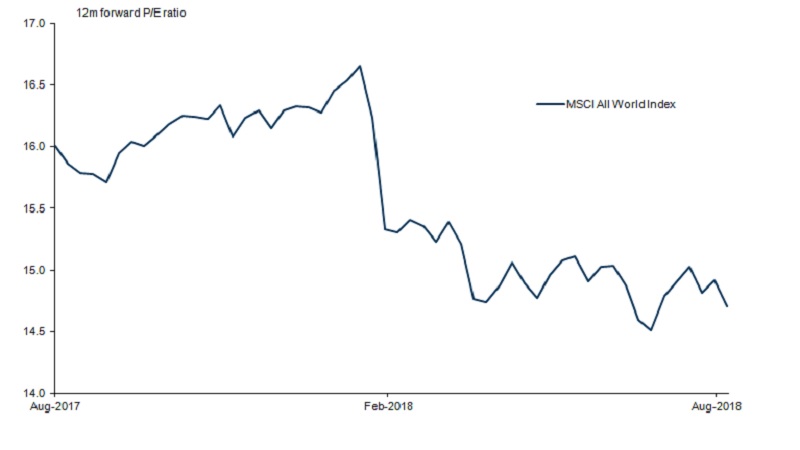 Perhaps on top of all of this, there is the simpler idea that the stellar gains from 2016 and 2017 needed time to be digested. We shouldn’t be shocked that a 64% return from the MSCI all countries world in dollars in just under 24 months, eight years into a bull market, should result in a little investor dyspepsia.

Our hunch remains that this phase will pass.

The economic backdrop remains healthy. We expect the US fiscal boost to provide some degree of extra support for its trading partners. Meanwhile the domestic drivers for the European economy remain in good shape, as unemployment continues to fall and the prospects for investment remain encouraging.

China is slowing at the deliberate hands of her policymakers; however, state control over the levers of the economy should mean that a collapse is far from our central case.

There are certainly things to worry about in some emerging market economies - Turkey, Argentina, Venezuela and South Africa spring to mind – but these problems look idiosyncratic rather than symptomatic of a wider malaise.

We see these problems as being the hangover effects of bad policy decisions in certain unfortunate countries, rather than the seeds of the next emerging market crisis.

We are not out of the woods on trade wars, but we still suspect that the approach of the midterm elections campaign trail in coming months may help cool tensions a little.

All told, there have been plenty of reasons for stocks to flat-line over the last six months, but we expect there to be less excuses in the quarters ahead.  Some exposure to emerging markets, in particular Asia, still looks appropriate as does a leaning to continental Europe and the US within the developed world.