Keep calm and carry on

Many investors seem to expect much stronger inflation and higher rates. While somewhat higher rates seem possible, this is likely be to be contained. Earning carry and profiting from volatility could be key to generating returns this year.

With the US Federal Reserve committed to keep the policy rate at 0.25% through to 2023, yields have trended higher since August. This has translated into a steepening of the rate curve with the difference of the 10-year yield and the 2-year yield now 100 basis points (bp). Meanwhile, the difference between the 30-year and 5-year yield is 140bp, the highest level in five years. But to what extent can the long end of the rate curve break away from the short end?

The steepening rate curve has been mainly driven by higher breakeven yields, the market implied expectations for inflation. This is raising concerns of a new era of high inflation. While inflation is likely to pick up from depressed levels, a recovery in breakeven yields does not necessarily mean that real inflation will follow.

Historically, breakeven yields have been, to a large degree, simply a reflection of risk sentiment during periods of market stress. The chart plots the US 5-year breakeven yield against US high yield bond spreads (inverted), highlighting their strong correlation, in particular during crisis periods and during subsequent recovery phases.

Once high yield spreads fully recovered, the upward trend for breakeven yields seemed to end. The current move may follow a similar pattern with the recovery in breakeven appearing to be mostly a function of improved risk sentiment and less an indication that a new era of excessive inflation has arrived. 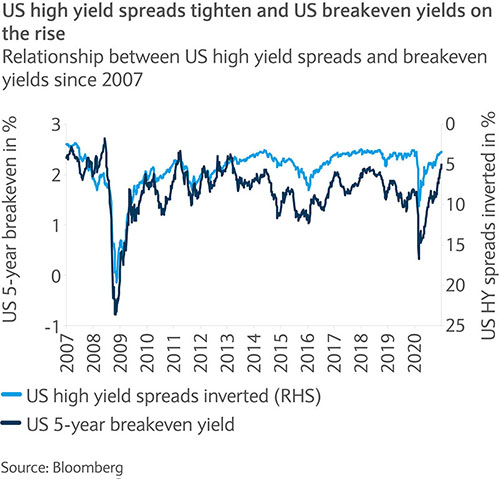 Inflation, stronger, but not excessive

The prospects of a recovery, a US central bank that tolerates higher inflation more and excessive growth in the monetary base increases the risk that inflation builds.

Consensus expectations among economists and those implied by financial markets point to stronger, but not excessive, inflation in two to three years. The forecast for the US consumer price index (CPI) in 2022 lies between the more bullish predictions and more defensive views of leading investment houses that range between 1.7% and 2.5%.

Inflation swaps suggest an increase of US CPI from 1.4%, to between 2.1% and 2.3% by December 2027. Considering that PCE inflation (personal consumption expenditure), the Fed’s preferred inflation indicator, trades roughly 30bp below CPI on average, this provides hardly any environment of a desired overheating. Even a recovery, implied by most parts of the market, does not seem to make a case for rate hikes in the near future.

Larger US-treasury supply through $1.9tn of additional fiscal stimulus, recently suggested by Joe Biden, seems to be the remaining justification for steepening at the long end of the yield curve. The Fed is likely to absorb a large part of the supply by increasing duration and expanding the balance sheet. While some further steepening is possible, the justification for this seems limited. More to the point, higher rate spikes open up opportunities to lock-in yields.

But how to capture higher yield?

The challenge for investors is how to achieve returns in the bond market in the short term. Lower trending rates have been the largest driver for positive performance in bond markets in 2020.

Rates are unlikely to trend lower from here, meaning carry (the yield over the respective government bond yield) seems the most important driver for returns going into 2021. At current levels spreads represent the biggest building block for the overall yield: for US investment grade segment over 50% of yield, sterling over 80% and in euro 100% given negative rates.

With spreads across investment grade, high yield bonds and emerging market bonds close to record tight levels, overall yields and respective return prospective seem underwhelming. But markets as well as spreads are unlikely to remain static, especially during an early phase of recovery. Volatility has the potential to pick up, leading to higher spreads and potentially higher yield opportunities.

A segment of the bond market that stands out are BB-rated bonds. In the US, the sub-segment was the best performing one in the US high yield bond market last year returning 10.14%. The average spread, 245bp, is currently at the lower end of the range over the last 10 years, though two factors could lead to further compression.

Firstly, the relative yield advantage over government bond yields, as opposed to the absolute spread, is at the highest level since 2012. Admittedly, this is more a result of depressed yields rather than wider absolute spread levels. That said, should a gradual recovery materialise and a low rate environment persist, institutional flows will likely spark further spread compression. Previous periods (such as 2013 and 2016) have shown that such trends can last for two years or more (see chart).

Secondly, the quality of the BB-segment has improved in quality during the crisis. While default rates may not have reached the peak, defaults were concentrated in single B-rated (5.8%) and CCC-rated bonds (20.6%) last year. By contrast, BB-rated bonds did not experience any default, according to rating agency Moody’s.

The events of last year had a positive side-effect, the quality of the BB-segment improving. The BB-segment now entails larger and more established, well-known and downgraded BBB-rated (fallen angels) names. At the same time more vulnerable issuers were downgraded from BB to single B or lower given the tough economic conditions resulting from the pandemic.

As re-iterated in our Outlook 2021, volatility in spreads as well as spikes in rates may open further opportunities to lock in yields and secure carry returns. Selection and focus remains key.