An Earthrise moment: the end of the carbon age

On Christmas Eve 1968, during their fourth orbit around the moon, the crew of Apollo 8 became the first humans to see an Earthrise. A blue marble against the darkness of space, their image of our fragile oasis of life became a driving force for the environmental movement. Yet still, our carbon use has continued unchecked.

For hundreds of thousands of years, the level of carbon in our atmosphere had fluctuated between 160-300 parts per million (ppm)1. From 1850 however, our ability to harness the power of energy advanced, triggering the start of the Industrial Revolution and immeasurably advancing our societies – at the immense cost of putting carbon into the atmosphere on an unprecedented scale. In December 2020, our atmospheric carbon reached 415ppm2. Last year was the warmest on record3for our planet and may prove to be one of the coolest of the next century4.

The world has had another Earthrise moment, a collective realisation that we have to find a way to halt carbon emissions in order to survive.

This same year, wildfires, extreme weather and a global pandemic once again brought home the fragility of our planet. The world has had another Earthrise moment, a collective realisation that we have to find a way to halt carbon emissions in order to survive. The solution must be global, intergenerational and investment-driven - because to tackle this common challenge, we need to innovate.

Rather than depending on a single silver bullet to solve this challenge, it will take innovation across all parts of our economy. Reducing green premiums – the difference in cost between a product that uses carbon, and its carbon-free alternative – is key.

As with many significant advances, government will need to play a key role in either underwriting risk or ensuring the cost of carbon is paid for. This will help drive investment into longer-term innovation, with a higher tolerance to risk. The formation of green banks and green supranational debt provides a useful foundation for this endeavour, but a broader war effort will be required to achieve what is needed.

To succeed on our collective goal to reduce carbon in the atmosphere, we need to make progress on two sides of the same coin – increase the supply of carbon-free energy, and decrease the demand for carbon. Unlike in 1968, we now have the technologies to begin transitioning towards a low-carbon economy. Former Bank of England governor Mark Carney calls the transition to net-zero the “greatest commercial opportunity of our age”5.

Unless otherwise stated, companies referenced in this report were companies held by our Sustainable Total Return Strategy as of 31 December 2020 and may no longer form part of our portfolios. Reference to specific companies in this report is not an opinion as to their present or future value and should not be considered investment advice or a personal recommendation. They’re included in this report to demonstrate the positive impact companies can have. 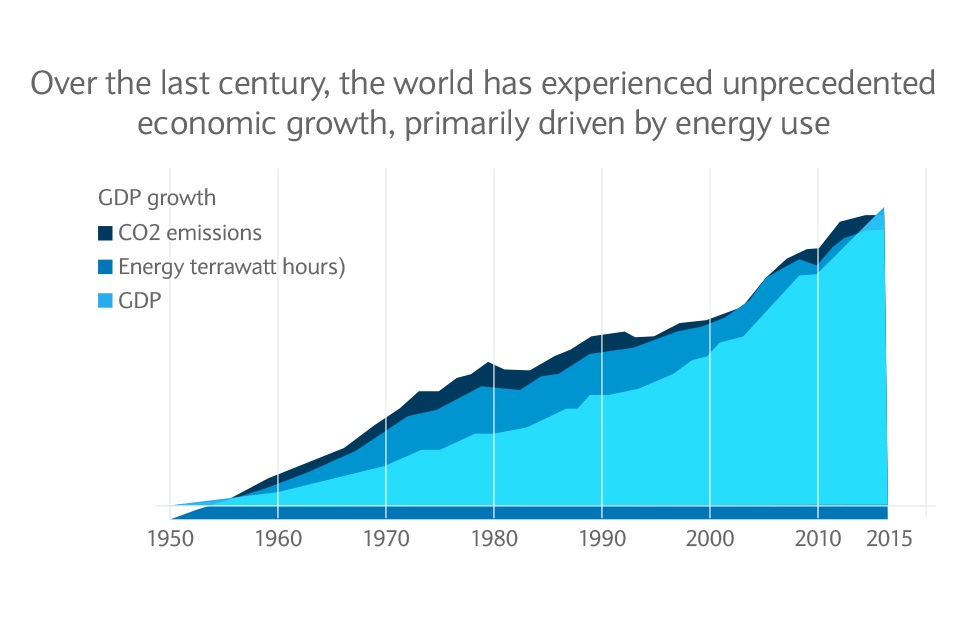 Source: Our World In Data

Electricity, heat and transportation account for over 70% of the 49.4 billion tonnes of CO₂ we emit globally each year6. While coal still accounts for the largest component of electricity generation, advances in technology and manufacturing processes have pulled down the cost curves of renewable energy dramatically over the past decade, making it possible to plan for a future without coal-powered energy.

As a result, 67% of new world-wide energy capacity coming on line was renewable in September 2019-20208; representing an investment of over US$300bn globally9. Below are some of the companies making this happen.

One of our large technology providers enables utilities to monitor solar panel energy generation and connection status in real-time, allowing for energy optimisation and forecasting scenarios. These developments alongside a myriad of other small improvements have driven the price reductions and has made the ubiquitous technology much more feasible for rooftop and utility-scale solar installation. The earth enjoys 173,000 terawatts of energy from the sun each year – over 10,000 times more power than we use as a planet13.

It’s no surprise, therefore, that in the last year, the installation of solar cells was the largest contributor to new renewable energy capacity – adding 118 gigawatts of capacity and being the preferred technology in over a third of nations worldwide14.

As the pandemic spread and global lockdowns were put in place, we saw a record drop in our consumption of energy, six times greater than the previous record in 200915.

Earth Overshoot Day, the day that marks when humanity’s demand for ecological resources and services in a given year exceeds what the Earth can regenerate, in that year fell on 22 August – 24 days later than in 2019, pushing the date back to where it was 15 years ago16. Fossil fuel energy sources saw the largest declines, while renewable sources remained relatively stable17.

During 2020, the UK grid went 67 days without using coal to generate electricity – marking the longest period of being coal-free since the industrial revolution18. This run was only ended when one of the UK’s remaining three coal plants fired up for a routine test after maintenance. The falling demand for fossil fuel primary energy generation has put downward pressure on fossil fuel prices, with the price of oil even briefly falling into negative territory at one point last year19.

As we look forward, continued improvement in our ability to capture renewable energy more cheaply, combined with improvements in batteries and increased demand from electric vehicles should see renewables overtake fossil fuels.

While the transition to clean energy generation is critical, the other side of the coin is also important: carbon-energy demand. The International Energy Agency estimates that to be on the path to net-zero by 2050, carbon-energy demand needs to drop by -17% by 2030 – back to a level last seen in 200620.

This needs to be achieved through a broad range of marginal gains. For instance, replacing flights under one hour duration with lower carbon alternatives, walking or cycling for trips under 3km, and reducing road traffic speeds by 7km per hour would collectively reduce emissions from transportation by 20%. Technology is key in helping to reduce the amount of carbon we use.

Increasingly, companies are understanding their role in addressing climate change and are recognising that a lower operational carbon footprint can build in operational resilience and help attract customers and drive profitability. In 2019, the UK Committee on Climate Change said: “It will be businesses that primarily deliver the net-zero target and provide the vast majority of the required investment”23.

Climate groups, such as the Science Based Targets Initiative (SBTi), the Race to Zero Coalition and RE100, have seen thousands of the world’s largest companies sign up to ambitious targets to reduce their carbon footprint – leading the way to a zero-carbon economy.

Through their ‘Move to Zero’ programme, Nike powers 100% of its US offices and stores with renewable energy24. It is also a leader in promoting a circular economy and provides sustainability scores for 57,000 materials – which helps designers lower the carbon footprint of products25.

Likewise, Unilever now uses 100% renewable grid electricity globally, across all facilities, and has reduced CO₂ energy emissions from manufacturing by 65% since 200826.

Amazon has 127 renewable energy projects across the globe, including 59 utility-scale solar and wind projects, generating more than 18 million megawatts hours (MWh) of energy annually- enough to power more than 1.7 million US homes27. While Visa is 100% powered by renewable energy across its global facilities28.

Climate change is the defining challenge of this century and one of the greatest existential challenges that our planet has ever faced. If the climate keeps changing faster than our efforts to address it, future generations will be unable to curb the inevitable and irreversible damage. We’re the last generation that’s able to stop climate change. But, fortunately we’re also the only generation to have the technological innovation and economic reality to do so.

The carbon footprint of the equities in our sustainable strategy is already materially lower than that of the wider market with 82% less weighted-average carbon intensity versus the MSCI All Country World Index. This is thanks to a mandated divestment from fossil fuels, combined with a focus on knowledge-based businesses that typically derive their value from intellectual property.

Investor support for companies that are taking ambitious steps to mitigate their own operational environmental risk and the allocation of capital to companies relentlessly pursuing green innovation is a powerful force that gives the backing needed to spur positive change. This investor demand for green reform, coupled with government underwriting of risk and the reduction of green premiums will drive the transition to our new green world.

Companies the size of Google can have a similar impact on the environment as a country. For that reason, when Alphabet, Google’s parent company, became the first major company to become carbon neutral in 200729it became an example to many.

It was the first global enterprise to match its energy use with 100% renewable energy in 201729. It also operates the cleanest cloud in the industry and is the world’s largest purchaser of renewable energy29. It’s important to recognise that there is no perfect company, however, Alphabet’s commitment to becoming carbon neutral is admirable.

Last year, the company eliminated its entire carbon legacy –bringing its lifetime net carbon footprint to zero29. It has become the first major company to commit to being carbon-free, everywhere, all of the time, by 203030.

This is incredibly challenging as the wind does not always blow, nor the sun always shine. However, the company aims to achieve this by investing in technologies, such as battery storage and artificial intelligence (AI). This means that every Gmail, YouTube video, Google search and Google Maps route will be supplied by clean energy. The investment will help create 12,000 jobs by 202529, and accelerate the global transition to clean energy.

How is Alphabet addressing the UN’s Sustainable Development Goals?

There is great opportunity for organisations to join the climate fight through their operations and products. As more companies follow the same path, meeting climate goals will become far easier to achieve.

Investments can fall as well as rise in value. Your capital or the income generated from your investment may be at risk.

Any past or simulated past performance including back-testing, modelling or scenario analysis, or future projections contained in this communication is no indication as to future performance. No representation is made as to the accuracy of the assumptions made in this communication, or completeness of, any modelling, scenario analysis or back-testing. The value of any investment may also fluctuate as a result of market changes.

Barclays is a full service bank.  In the normal course of offering products and services, Barclays may act in several capacities and simultaneously, giving rise to potential conflicts of interest which may impact the performance of the products.

Where information in this communication has been obtained from third party sources, we believe those sources to be reliable but we do not guarantee the information’s accuracy and you should note that it may be incomplete or condensed.

Neither Barclays nor any of its directors, officers, employees, representatives or agents, accepts any liability whatsoever for any direct, indirect or consequential losses (in contract, tort or otherwise) arising from the use of this communication or its contents or reliance on the information contained herein, except to the extent this would be prohibited by law or regulation. Law or regulation in certain countries may restrict the manner of distribution of this communication and the availability of the products and services, and persons who come into possession of this publication are required to inform themselves of and observe such restrictions.

THIS COMMUNICATION IS PROVIDED FOR INFORMATION PURPOSES ONLY AND IS SUBJECT TO CHANGE. IT IS INDICATIVE ONLY AND IS NOT BINDING.